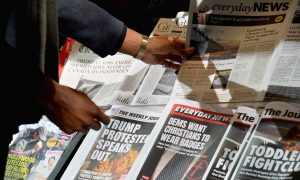 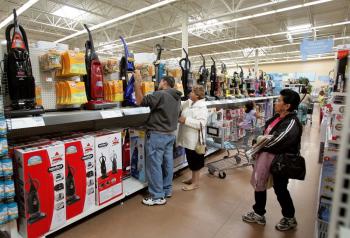 Shoppers at a Wal-Mart store in Chicago, Illinois. The U.S. exported $4.1 billion of U.S.-made products to China in Jan. 2009, while it imported $24.8 billion Chinese-made products. (Tim Boyle/Getty Images)
Business & Economy

WASHINGTON, D.C.—American workers and the U.S. economy have been negatively affected by China's unbridled industrial dumping efforts, which has caused the U.S. to lose its manufacturing base over the past two decades, testimonies from a recent congressional hearing suggested.

"The U.S. economy is in shambles not because we have been consuming too much, but because we have been producing too little,” said Rep. Walter B. Jones, R-N.C., in a speech before the U.S.-China Economic and Security Review Commission Hearing. “A country can only be as rich as the wealth it produces and America must make boosting its production a priority if we are to avoid a prolonged recession or a depression."

Jones testified at a hearing on “China’s Industrial Policy and its Impact on U.S. Companies, Workers, and the American Economy” last week.

Economic theory advocates that a country should manufacture first for domestic consumers and then export the excess to countries that for one reason or another cannot produce that particular product. On the other hand, a country should buy from foreign countries certain manufactured products that are produced more economically than it itself can produce. In the end, no trade imbalance should result.

But China does not adhere to this principle. It does not produce products for domestic consumption by the Chinese people, but for export only, dumping its goods on foreign markets—distorting world trade and creating unprecedented trade imbalances.

Research into China's way of doing business indicates that it dumps cheap government-subsidized manufactured goods on the market, as many Chinese manufacturers hold employees in servitude, paying little or nothing for their labor. Additionally, many products are manufactured in prison camps by China's notorious forced labor for zero cost.

That’s a business model no country can compete with.

Jones was not telling America to mirror China's business orientation, or that the U.S. government should subsidize America's manufacturers. But he warns that unless American industry and government cooperate, the United States will be an economic loser.

"I do not advocate a state-run economy, but the United States will not be able to compete economically with China in the long run unless we come up with a comprehensive policy designed to attract investment to domestic industries subject to global competition," he said.

The United States exported $4.1 billion of U.S.-made products to China in January 2009, while it imported $24.8 billion Chinese-made products, creating a trade imbalance of $20.5 billion in the process, according to the latest U.S. Census Bureau, Foreign Trade Division data.

The numbers are staggering. In 2008, China accounted for 60.76 percent, or $277 billion of the U.S. trade deficit for manufactured goods brought to the U.S., according to trade statistics from the U.S. Department of Commerce's TradeStats Express Web site.

Between the years 2001 and 2008, the cumulative trade deficit between the U.S. and China amounted to $1.5 trillion for manufactured goods, with 4.5 million Americans losing their jobs in the process.

In particular, China holds a more than 40 percent global market share in the textile industry. Other countries simply could not compete with China's heavily subsidized textile industry, Jones charged. In total, 600,100 American textile workers have lost their jobs.

Keeping the above trade figures and imbalances in mind, the U.S. representative has sent a red flag to government and industry leaders.

"China’s policies will probably contribute to severe disruption in global markets,” said George T. Haley, a professor at the University of New Haven, at the hearing. “Though the Chinese policies tend to reduce consumer prices, they do so in anti-competitive fashions. The use of government subsidies to control costs in Chinese industry, and to promote the acquisition of competitive advantages in brands and technology, creates situations where foreign companies cannot compete and are forced into closure."

The global steel industry has suffered deeply from China's industrial policies. More than 20 U.S. steel companies have closed doors, resulting in tens of thousands of layoffs.

According to Haley, China is targeting certain industries to subsidize, such as the computer industry, to flood the market with products sold at razor-thin margins.

Getting the U.S. Industry Back Into Gear

The question is—where does America go from here?

To bring the U.S. industry back to competitiveness and to provide a fair "playing field," the U.S. trade policy must be revamped, Jones argued.

A major matter of contempt is the foreign border adjusted tax, which is the value-added tax (VAT). VAT taxes, under which imports are taxed and exports are rebated, are employed by most of America's trading partners.

But most of all, exchange rate adjustments, such as the Chinese currency manipulation, puts American exporters at a major disadvantage.

Jones also recommends that suggestions by the "Coalition to Fix America's Economy" should be taken under review and discussed rigorously.

The coalition suggested that America must "support actions to combat the illegal, mercantilist practice of prolonged currency misalignment, including legislation to make it actionable under U.S. trade law, and support aggressive enforcement of U.S. laws to halt foreign illegal trade activities such as dumping, subsidization, and intellectual property theft. In addition, U.S. policy must ensure that all goods sold here meet U.S. food and product safety standards."

Saving and spending rates contribute further to the economic turmoil. Countries that do not spend but save—such as China—and countries that spend and do not save, such as the United States, have contributed to the problems faced globally, said Alan Wolff from the law firm Dewey & LeBoeuf in his testimony.

Haley suggests that the United States should invest in vertically integrated manufacturing and control raw materials that are integral for the production of certain products. America must be ahead in innovation and technological advantages and refuse to transfer technologies to China.

"The United States needs to be vigilant in responding to various Chinese policies and practices … we [need to] encourage investment in America by offering the same incentives as China and other countries,” said Clyde V. Prestowitz, president of the Economic Strategy Institute, an economic think tank based in Washington, D.C. “Although it is true that China stacks the deck in its favor, we cannot use Chinese industrial policy as a scapegoat for our own failings.”