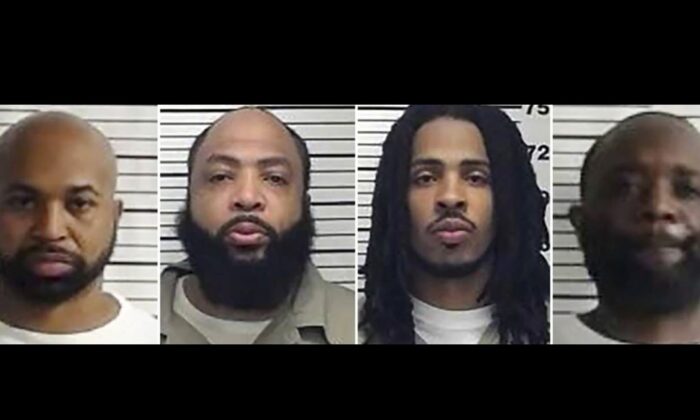 Federal and state officials are searching for four inmates who escaped from a federal prison in Virginia this weekend, authorities confirmed.

Corey Branch, Tavares Lajuane Graham, Kareem Allen Shaw, and Lamonte Rashawn Willis went missing from a camp at the Federal Correctional Complex Petersburg in Hopewell, Virginia, at around 1:45 a.m. on Saturday, authorities told FOX 5. Officials did not say how the four escaped from custody.

Other details about their escape were not immediately released, but an official told NBC12 that the four “walked away” in the early morning hours. The Bureau of Prisons confirmed in a news release that the four had escaped.

The U.S. Marshals Service, the FBI, and other law enforcement agencies were notified of their escape, officials said. An investigation is ongoing.

Branch, 41, was sentenced in the Eastern District of Virginia to more than 13 years for possession with intent to distribute fentanyl and felon in possession of a firearm.

Willis, 30, was sentenced in the Eastern District of Virginia to 18 years for possessing and concealing a stolen firearm and possession of a firearm by a convicted felon.

Shaw, 46, was sentenced in the Western District of Virginia to more than 16 years for conspiracy to possess with intent to distribute a measurable quantity of heroin.

The U.S. Marshals Service said that anyone with information concerning the four inmates’ whereabouts should call them at (804) 545-8501, an official told FOX 5.

It comes weeks after an Alabama prisoner and accused murder suspect escaped with a female prison guard before they were located and found several states away in Indiana. The guard, Vicky White, killed herself during a police pursuit before the suspect, Casey Cole White, was captured and extradited back to Alabama.

And in early June, police shot and killed a convicted murderer who escaped from a transport bus for high-risk inmates in Texas.

“Suspect Gonzalo Lopez is captured [and] deceased,” the Leon County Sheriff’s Office said in its update.

Lopez, 46, is believed to be connected to the murder of a Houston family of four minors and one adult. The fugitive stole the family’s truck, a 1999 white Chevrolet Silverado, from a rural weekend cabin after he allegedly killed the family, police said.

The Associated Press and Lorenz Duchamps contributed to this report.