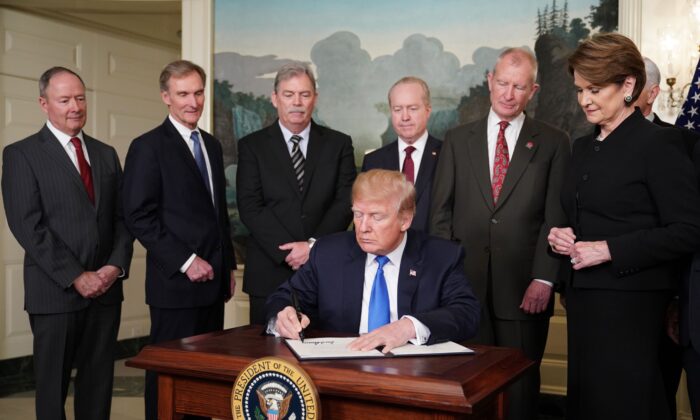 The U.S. government stated on Sept. 2 that it will continue to impose tariffs on hundreds of billions of dollars worth of Chinese goods while continuing the statutory review of those tariffs, which were initiated during the Trump administration.

The Office of the U.S. Trade Representative (USTR) said in a federal notice that the department received requests from more than 400 U.S. companies and interested parties this spring and summer to maintain the “Section 301” tariffs imposed on Chinese products in 2018 and 2019.

The U.S.–China trade war broke out in 2018 as then-President Donald Trump moved to penalize the Chinese Communist Party (CCP) for its long-held unfair trade practices, including benefiting from forced labor from the Chinese populace. The Trump administration successively imposed punitive tariffs of 7.5 to 25 percent on more than $360 billion of imported products from China.

According to the 1974 U.S.trade law, tariffs automatically expire in four years if there are no objections from domestic firms. The China tariffs remain in place while the USTR awaits comments as part of a scheduled formal review of them. The statutory review began in May and might take months.

Major Chinese online news portal 163.com also published an article the same day, stating that the USTR’s decision was “harming others and itself at the same time.” It quoted Russian President Vladimir Putin’s comment that “the United States is walking on the [former] Soviet Union’s path, and its gait is confident and steady,” to say that the United States “creates unnecessary problems for themselves until they can no longer cope with them” by keeping the China tariffs in place.

Domestically, while some U.S. companies have benefited from the tariffs, others that rely on imports from China continue to oppose them because of their higher import prices.

The Biden administration was considering removing some of the tariffs in May, also as a means to reduce inflation. However, due to the CCP’s aggressive response to U.S. House Speaker Nancy Pelosi’s visit to Taiwan in August and its continuing military exercises surrounding Taiwan, the China tariff relief plan has since been tabled.

Wang He, a columnist for The Epoch Times, said on Sept. 3 on NTDTV’s “Global Watch” that the U.S. government made the right decision in maintaining the Trump administration’s China tariffs.

“Continuing the Trump era’s tough tariffs on China is Biden’s countermeasure against the Chinese regime,” he said.

“It’s mainly because, since it was allowed to join the World Trade Organization, China has been using unequal means in trading to develop its economy on the foundation of jeopardizing other countries’ [economies],” Shu said. “Its coercive economic expansion model has caused the disappearing of American middle class and losses to manufacturing industries and jobs.”

He said that since Trump imposed the tariffs, many industries have come back to the United States.

“The tariffs take the U.S.–China trade back to equal ground.”