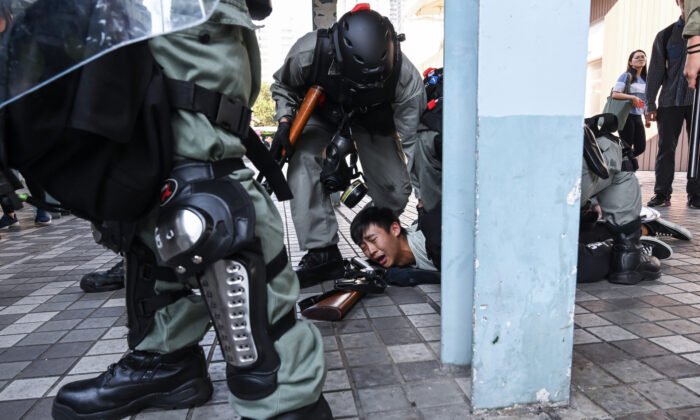 U.S. lawmakers have condemned Hong Kong police over the shooting of a protester at point-blank range amid escalating violence in the ongoing protests against Beijing’s influence in the city.

On the morning of Nov. 11, an unarmed 21-year-old protester surnamed Chow was shot in the abdomen by an officer at close range in the neighborhood of Sai Wan Ho—marking the third protester shot with a live round since the mass pro-democracy movement began in June.

According to Hong Kong media, the bullet ruptured Chow’s right liver and kidney. He remained in critical condition in Eastern Hospital after going through emergency surgery, which involved removing his right kidney and part of his liver.

In a widely circulated video of the incident, one police officer pointed his gun at point-blank range at a protester wearing a white hoodie before grabbing him by the neck.

A second protester dressed in black, Chow, approached the officer and tried to swat the gun from his hand. He was shot by the police officer at close range and collapsed to the ground.

The Hong Kong Institute of Vocational Education, in a statement, confirmed Chow is a student at their Chai Wan campus, and asked for a “thorough investigation.”

In a press conference on Monday, a police spokesperson said the officer’s action was “reasonable” because he feared the protester would snatch his revolver, adding that the incident would be investigated.

At least 99 people were hospitalized for injuries during clashes on Nov. 11, with two in critical condition, according to the Hospital Authority. Over 260 people were also arrested.

The day saw heightened levels of violence as protesters and police clashed at several districts, numerous universities, as well as the business and financial district of the Central area.

The shooting sparked a chorus of criticism from Western officials and international rights groups.

Sen. Marsha Blackburn (R-Tenn.) called the incident “Tiananmen Square 2.0,” referring to Beijing’s bloody crackdown of pro-democracy student protesters in Tiananmen Square in 1989, where thousands are estimated to have died.

“This is no police force, it is a freedom suppressing, anti-democracy squad,” she wrote in a tweet.

“The Hong Kong Police are out of control and escalating the level of violence against unarmed people,” Rep. Jim McGovern (D-Mass.) said on Twitter. He also urged the Senate to bring the Hong Kong Human Rights and Democracy Act to the Senate floor.

The proposed legislation, which passed the House unanimously in October, would require the U.S. administration to conduct an annual review to determine whether the city is sufficiently autonomous from the mainland to justify its trade privileges with the United States. It would also impose sanctions on Chinese and Hong Kong officials responsible for human rights violations in the city.

Man-Kei Tam, director of Amnesty International Hong Kong, said the incident marked “another shocking low for the Hong Kong police” and called for the suspension of the responsible officer.

Tam also noted another incident where a police officer on a motorcycle was filmed driving into a crowd of protesters, knocking at least one of them to the ground.

“These are not policing measures—these are officers out of control with a mindset of retaliation,” Tam said.

Police on Monday said the officer on the motorcycle had been suspended.

Sen. Ben Sasse (R-Neb.) said that incidents like that was “why Hong Kongers have turned against the despots in the Chinese Communist Party.”

“Beijing’s power depends on violence because they don’t give a rip about human dignity,” he said in a statement.

Britain’s Foreign Office said in a statement that the events that unfolded in Hong Kong on Monday were “deeply disturbing” and urged for “a way forward through dialogue.”

In recent remarks, Chinese and Hong Kong authorities have showed toughened stances in dealing with the unrest.

In a press conference on Nov. 11, Hong Kong leader Carrie Lam labelled protesters the “enemy of the people,” and vowed they “will never win.”

“If there is still any wishful thinking, that by escalating violence, the Hong Kong SAR [special administrative region] government will yield to pressure, to satisfy the so-called political demands—I am making this statement clear and loud here: that will not happen,” Lam said.

The Chinese state media Global Times, in a Nov. 11 editorial following the shooting, said it “resolutely supports Hong Kong police” for their actions. State broadcaster CCTV similarly said they must use “the most strict law enforcement acts” against the “frenzied” protesters.

On Nov. 11, a green-shirted middle-aged man got into a heated argument with what appeared to be a group of Hong Kong protesters on a footbridge in the neighborhood of Ma On Shan, during which he was set on fire.

Police later called the act an attempted murder, but did not identify the perpetrator.

Global Times commented that this act was “no different to ISIS terrorists” and encouraged the police to “harden up.”

More than 10,000 Hong Kong education professionals have signed a joint letter calling for a citywide class strike after police rushed into multiple campuses to arrest student protesters on Nov. 11.

The Nov. 11 protests also saw police making arrests inside a church for the first time. The police pepper-sprayed a young protester who had been subdued and several journalists at Holy Cross Church in Sai Wan Ho, Inmedia reported.

Correction: A previous version of this article gave the wrong state for Rep. Jim McGovern. The correct state is Massachusetts. The Epoch Times regrets the error.