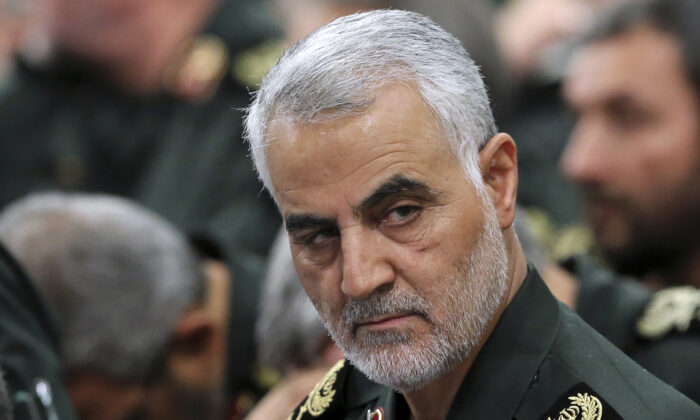 In this Sept. 18, 2016 photo released by an official website of the office of the Iranian supreme leader, Revolutionary Guard Gen. Qassem Soleimani, center, attends a meeting with Supreme Leader Ayatollah Ali Khamenei and Revolutionary Guard commanders in Tehran, Iran. A U.S. airstrike near Baghdad's airport on Friday Jan. 3, 2020 killed Gen. Qassem Soleimani, the head of Iran's elite Quds Force. Soleimani was considered the architect of Iran's policy in Syria. (Office of the Iranian Supreme Leader via AP, File)
Chinese Regime

The recent U.S. airstrike that killed top Iranian general Qassem Soleimani will send a strong message to the Chinese regime, which is a key Iranian ally, according to a China expert.

It signals that Washington will take resolute action to deal with “bad actors,” including the Chinese communist regime—one of Iran’s top economic and military partners.

“Bad actors take their cues from our reactions to other bad actors,” Gordon Chang, the author of “The Coming Collapse of China,” told The Epoch Times in an email. “A resolute response to one of them results in the others shrinking back into the shadows—and vice versa.”

The attack came as the United States and the Chinese regime are on the cusp of signing a “phase one” trade deal that has eased tensions in a trade war initiated by Washington 17 months ago, to combat a range of China’s long-standing trade abuses.

Soleimani, a 62-year-old general who led the overseas arm of the Islamic Revolutionary Guard Corps, was killed in Baghdad on Jan. 3 in an airstrike authorized by President Donald Trump. The general was regarded as the second most powerful figure in Iran after Supreme Leader Ayatollah Ali Khamenei.

In response, Iran has vowed to exact revenge.

U.S. Secretary of State Mike Pompeo said the strike aimed to disrupt an “imminent attack” that would have endangered Americans in the Middle East.

Trump told reporters in Florida that the attack was to stop a war, not to start one. He added that while the United States doesn’t pursue “regime change” in Iran, the “regime’s aggression in the region, including the use of proxy fighters to destabilize its neighbors, must end.”

The killing of Soleimani marks an escalation in the decades-long standoff between Tehran and Washington. Tensions rose after the Trump administration pulled out of the 2015 Iran nuclear deal.

As an ally of Iran, the Chinese regime will have to support Tehran against the United States, June Teufel Dreyer, professor of political science at the University of Miami told The Epoch Times in an email.

On Jan. 3, Chinese foreign ministry spokesperson Geng Shuang urged the United States “to remain calm and exercise restraint to avoid further escalation of tensions,” adding that “the stability and peace in Middle East gulf region should be maintained.”

China is Iran’s top trading partner and was also its largest buyer of crude oil prior to U.S. sanctions on Iranian oil taking effect in May 2019. Analysts say the Chinese regime continued with some oil imports even after the expiration of its exemption to the embargo on Iranian crude oil.

The U.S. administration in September imposed new sanctions on several Chinese entities and individuals it said knowingly transferred oil from Iran in violation of Washington’s embargo.

“China needs oil and partnerships with countries that oppose the U.S.: Iran fits both,” Dreyer said.

Beijing uses its relationships with Iran and other countries, such as North Korea, to force the United States to shift its focus away from dealing with the Chinese regime’s threats, said retired U.S. Air Force Brig. Gen. Robert Spalding, senior fellow at the Washington-based think tank Hudson Institute.

“So it’s all part of this general approach to disrupting the international order and … presenting challenges that the U.S. is required to step up and meet, because it ultimately weakens the U.S.,” Spalding told The Epoch Times. He noted that Beijing will be able to use that approach as long as it doesn’t affect the price of oil.

“To the extent Iran and the terrorist groups it sponsors can cause problems for the U.S. there, the better for China,” Dreyer said.

The Chinese regime also has a long history of supplying Iran with weapons, including fighter jets, surface-to-air missile systems, anti-ship missiles, and attack submarines. According to a 2019 report (pdf) by the U.S. Defense Intelligence Agency, with the United Nations’ arms embargo on Iran set to end in October 2020, Tehran is already “evaluating and discussing military hardware for purchase primarily from Russia and, to a lesser extent, China.”

Chang said, “China has always supported Iran as it tried to bedevil the United States and the West, including supplying, directly and through proxies, technology, equipment, and materials for Tehran’s nuclear weapons program.”

The two countries, along with Russia, earlier in December conducted joint naval drills in the Gulf of Oman.

Apart from rhetorical gestures, the Chinese regime is unlikely to respond to the U.S. airstrike with concrete action, the experts said.

“Trump just hit one of its [China’s] partners and [China] cannot do much about it,” Chang said. “Therefore, [Chinese leader] Xi Jinping must think he appears—as is the case—helpless now that the American president has taken down a Chinese asset.”