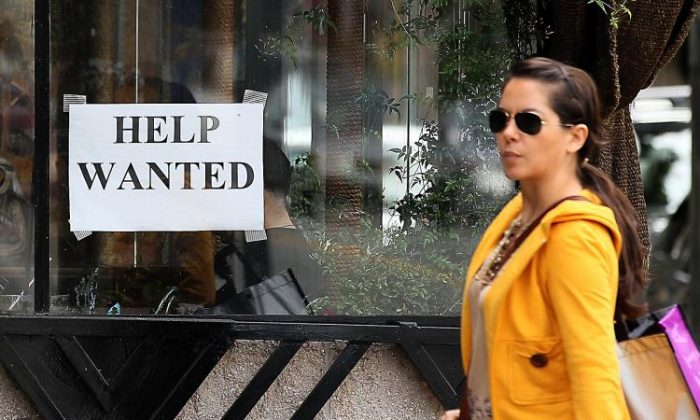 A pedestrian walks by a help wanted sign in San Francisco, Calif., on March 25, 2011. (Justin Sullivan/Getty Images)
US News

Initial claims for state unemployment benefits decreased by 9,000 to 214,000 (seasonally adjusted) for the week ending Jan. 4, compared to the week before, the Labor Department stated in a release (pdf) on Jan. 9.

The four-week moving average fell by 9,500 to 224,000 compared to the previous week’s revised average of 233,500, suggesting a positive longer-term trend in claims figures.

The number of continuing claims, however, which reflect people already collecting unemployment benefits, jumped by 75,000 to just over 1.8 million. While this is the highest level since April 2018, some economists say it likely reflects a short-lived spike in new claims after the Thanksgiving holiday. A surge in initial claims for the week ending Dec. 7 boosted claims to 252,000, the highest reading since September 2017.

“At this point, we are not concerned about the rise in initial claims and view it as a statistical quirk related to the seasonal adjustment process around Thanksgiving,” said John Ryding, chief economist at RDQ Economics in New York, explaining the apparent anomaly, according to Reuters.

“The last four consecutive weeks of declines in initial jobless claims are likely a result of the out-sized increase in claims (plus-49,000) in early December,” said Allen Sukholitsky, chief macro strategist at Xallarap Advisory. “Think of it as payback.”

Sukholitsky said year-over-year changes in initial claims are a better measure of the health of the broader economy than weekly or monthly figures.

“Over the last decade, the size of the declines in initial jobless claims has been steadily getting smaller,” he said. “In the past, shrinking declines have eventually turned into increases, many times without a recession taking place, but prior to every recession that has taken place, declines in initial jobless claims have shrunk and then begun to increase.”

In other measures of U.S. labor market performance, private-sector employment grew in December by 202,000 jobs.

“As 2019 came to a close, we saw expanded payrolls in December,” said Ahu Yildirmaz, vice president and co-head of the ADP Research Institute. “The service providers posted the largest gain since April, driven mainly by professional and business services. Job creation was strong across companies of all sizes, led predominantly by midsized companies.”

ADP private payroll numbers tend to surge in December because of adjustment difficulties related to removing the records of employees who have permanently left company payrolls.

“The accuracy of the ADP’s first estimate of monthly employment growth has never been anywhere near as good as we would have expected given the richness of the data source,” said Paul Ashworth, chief U.S. economist at Capital Economics in Toronto. “Nevertheless, this latest ADP reading supports our view that employment and GDP growth held up surprisingly well in the fourth quarter, even though some of the survey evidence weakened further.”

Mark Zandi, chief economist of Moody’s Analytics, said, “Looking through the monthly vagaries of the data, job gains continue to moderate. Manufacturers, energy producers, and small companies have been shedding jobs. Unemployment is low, but will begin to rise if job growth slows much further.”

Labor market strength has shored up consumer spending, helping to keep the economy on a path of moderate growth despite headwinds from trade tensions and slowing global growth that have had a dampening effect on manufacturing.

The United States is currently in its longest economic expansion in history, now in its 11th year.

The unemployment rate for November was 3.5 percent, the U.S. Bureau of Labor Statistics reported on Jan. 9.

The jobless rate broke below 4 percent in April 2018 and has stayed at or under that level for 20 straight months, which represents the longest such stretch since the 1960s.