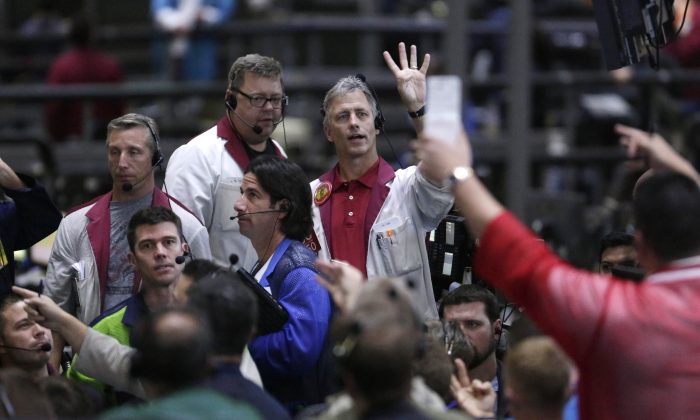 Traders work in the ten-year bond pit on the floor of the CME Group in Chicago on Sept. 24, 2014. Main Street investors have poured a trillion dollars into bonds since the financial crisis, and helped send prices soaring. As fund managers and regulators fret about an inevitable sell-off, the bigger fear is that when people go to unload, there wont be anyone to buy. (AP Photo/M. Spencer Green)
Business & Markets

US Gov’t Bonds’ Prices Surge the Most Since Financial Crisis

NEW YORK—Investors flooded into the U.S. Treasury market in a way not seen since the depths of the financial crisis, causing the yield on the benchmark 10-year Treasury note to fall below 2 percent for the first time in more than a year.

The yield on the benchmark 10-year Treasury note plunged from 2.20 percent Tuesday to as low as 1.91 percent Wednesday, its lowest level since June 2013. That’s a decline of 29 basis points, a Wall Street term to describe one one-hundredth of a percent, and a huge move in the context of the bond market.

The flood into U.S. government bonds may have been caused by a combination of factors, traders said. Two reports released Wednesday pointed to unexpected weakness in the U.S. economy. Also, foreign investors have been buying U.S. Treasurys much more than they have previously as they worry that Europe might slip into another recession.

For months, investors have been betting that U.S. Treasury yields will rise because the U.S. economy is improving and there are broad expectations that the Federal Reserve will raise interest rates next year. The Fed is also winding down a large bond-purchasing program.

At the beginning of the year, market strategists were calling for the yield on the 10-year note to go to as high 3.5 percent. That prediction has fallen flat.

Demand for bonds tends to fall, sending their prices lower and their yields higher, when investors expect strong economic growth and the possibility of inflation. The reverse happens when investors buy bonds: prices rise and yields fall.

The yield on the 10-year Treasury note is a benchmark for setting interest rates on mortgages and many other kinds of loans. When bond yields fall, it can translate into lower borrowing costs for individuals and businesses over time.

Investors were spooked by two economic reports released Wednesday that suggested weakness in the U.S. economy, something investors did not expect. U.S. retail sales fell 0.3 percent in September, however economists had predicted sales would rise. Also, an index measuring manufacturing in New York State fell sharply.

The bad economic data may have prompted some investors to buy bonds in order to cover “short” trades they had made against the market. “Short-covering” occurs when investors who have bet against a stock, bond or other security step back into the market and buy the security they had been betting against. They do that to prevent deeper losses on their bearish bets which would result if the price of the bond or other security they had bet against rises suddenly.

Traders also believe that high-frequency trading computers may have amplified the move downward.

By Wednesday afternoon the yield on the 10-year Treasury note was 2.09 percent, above its earlier low of 1.91 percent but still a large decline from 2.20 percent the day before. The yield has been mostly falling this year, and traded as high as 3 percent in January. It hasn’t traded consistently above 4 percent since shortly before the financial crisis of 2008.