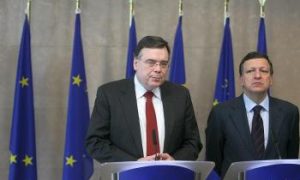 Iceland's Entry to EU Expected to be Smooth
0
International

By Marco t'Hoen
Print
The United States Department of Labor has awarded $20 million to combat child labor in Egypt, Jordan, and Bolivia.

These three countries have adopted laws to prevent or regulate child labor, but the practice is still quite common and even seen as necessary.

The grant focuses on education and training opportunities for children, and on helping alleviate the needs of poor families so children do not need to work, the release states.

Worldwide, 211 million children between the ages of 5 and 14 are working for income for their families, the U.N. International Labor Organization (ILO) estimates, and working is not always good. Egypt has ratified ILO’s Convention 138 that establishes a minimum labor age of 15.

However, the age laws are not enforced and there are an estimated 1.3 million to 3 million children workers, with largest portion by far working in agriculture. The $9.4 million granted by the DOL to the World Food Program will provide meals in Egyptian schools as well as rations for students’ families to mitigate the need for children to labor in the fields.

Jordanian law prohibits children under 16 from working and has compulsory school attendance until the age of 15. Yet the International Initiative to End Child Labor reported that tens of thousands of children are working, many in hazardous conditions, in a diversity of sectors in Jordan.

ILAB sees the end of child labor as a goal. “Eradicating child labor is a necessary task that binds us all together and has global benefits for everyone,” said Secretary of Labor Hilda Solis, in a release.

Bolivian NGOs are not seeking to stop child labor but are working to unite child laborers and provide better working conditions for them. In a report for the International Reporting Project, which provides opportunities for journalists to cover “under covered” issues worldwide, Forbes writer Helen Coster wrote that unionized child workers claim “child labor is a necessity born of poverty.”

Rather than stop child labor, unionists in Bolivia are trying to regulate working conditions, and according to Coster, want wages comparable to what adults earn, safer work environments, better medical care, and initiatives to create a community for working children.

The NGO opts for regulating child labor with the fear that an attempt at eradication would make matters worse for children. “If we propose to end all forms of child labor, we’re not going to do it. We’ll just have more clandestine labor in an even worse form than it currently exists,” said Jorge Domic, psychologist and director of social education at the Bolivian nonprofit Fundación La Paz, quoted by Coster.

The majority of the over 310,000 children laborers in Bolivia work in mines, in conditions so dangerous that they are never certain of returning alive after a day’s work. According to a list of goods produced by child labor published by ILAB last December, gold, silver, zinc, and tin are four of the six products in Bolivia produced through child labor. The list cites 128 goods from 70 countries that are now being produced under unacceptable child and forced labor conditions.