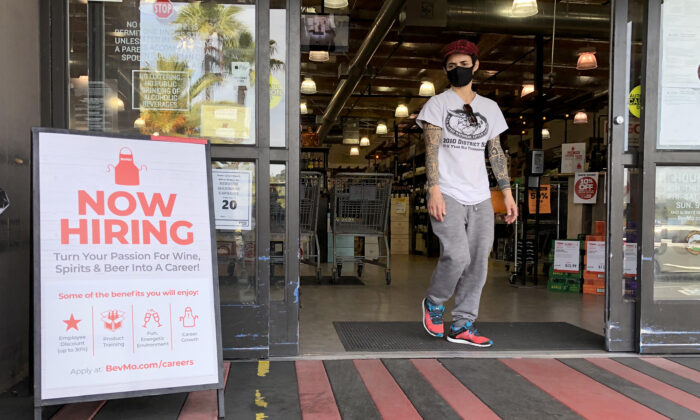 WASHINGTON—Job creation jumped by more than 50 percent in June from the previous month, with more people entering the labor force as the economy continued to recover. However, the unexpected increase in the jobless rate suggests that employment recovery may take more time than predicted.

The U.S. Labor Department announced on July 2 that the U.S. economy added 850,000 jobs last month, beating a consensus estimate of 706,000. The June unemployment rate, however, rose to 5.9 percent from 5.8 percent in May, as more people came off the sidelines and started looking for work.

Increased vaccinations and reopenings across the country led to the expansion of economic activity, boosting demand for more workers. As of June, however, the U.S. economy was still short 6.8 million jobs relative to its pre-pandemic level in February 2020.

In June, employment in leisure and hospitality surged by 343,000 jobs amid easing restrictions across the country. More than half of the job gain was in bars and restaurants. But the sector is still short by 2.2 million jobs compared to February 2020.

However, there’s still a lack of strong job creation on the goods side of the economy. Manufacturing increased by only 15,000 for the month. And the construction sector lost another 7,000 positions after losing a net 25,000 jobs over the past two months.

Another notable change was a 644,000 decline in the number of people working part-time for economic reasons, which could mean that these workers switched to full-time work.

Analysts were predicting a lower jobless rate for June. Instead, the unemployment rate was slightly higher than the previous month.

“Most concerning for the pace of the U.S. economic recovery going forward was the increase in the U.S. unemployment rate,” Scott Anderson, chief economist at the Bank of the West, wrote in a report.

“This unexpected and unwelcome increase in the unemployment rate last month suggests getting the U.S. back to pre-pandemic levels of unemployment will take some time—more time than many economists have been forecasting.”

Widespread labor shortages have led companies to boost wages, which could further intensify inflation pressures. There is an imbalance between supply and demand for labor, which needs to be monitored closely in the coming months, according to economists.

Americans are hesitant to return to work, which is hampering hiring. Manufacturers have reported “difficulty in hiring and retaining direct labor,” according to survey results of national factory activity from the Institute for Supply Management (ISM).

These challenges “across the entire value chain continue to be the major obstacles to increasing growth.”

The big question many people have is whether workers are encouraged to rejoin the labor market in states that opted to end the supplemental unemployment benefits early.

Severe labor shortages have led 26 states to end the expanded benefit program ahead of its expiration on Sept. 6. The effect of the early cancellation won’t be fully visible until early August, when the next jobs report is published.

“We think the ends of these special unemployment insurance programs will boost participation in the labor force, helping labor supply keep up better with related demand, and also should ease some of the upward pressure on wages,” Michael Feroli, chief U.S. economist at JPMorgan, wrote in a recent report.