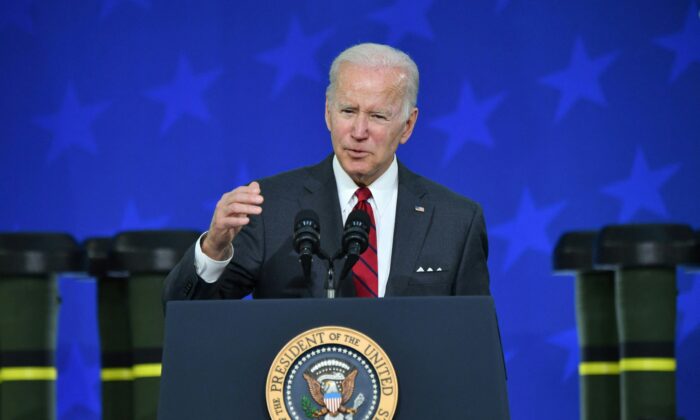 President Joe Biden speaks about security and the conlict in Ukraine during a visit to the Lockheed Martins Pike County Operations facility in Troy, Ala., on May 3, 2022. (Nicholas Kamm/AFP via Getty Images)
Russia-Ukraine War

US, G-7 Partners Impose New Sanctions on Moscow Ahead of Russia’s Victory Day

The United States, the European Union, and Group of Seven (G-7) allies on May 8 agreed to impose fresh sanctions against Russia, including penalizing state-controlled media, barring Western management consulting services in Russia, and tightening export controls.

The sanctions came a day before Russia’s Victory Day, which celebrates the defeat of Nazi Germany during World War II.

On May 8, U.S. President Joe Biden participated in a virtual conference with G-7 leaders and Ukrainian President Volodymyr Zelenskyy, according to the White House. Canada, France, Germany, Italy, Japan, the UK, and the United States make up the G-7.

The leaders released a statement at the conclusion of their meeting pledging their support for Ukraine and imposing fresh sanctions on Russia.

“The G-7 and Ukraine stand united in this difficult time and in their quest to ensure Ukraine’s democratic, prosperous future. We remain united in our resolve that President Putin must not win his war against Ukraine,” the statement reads.

The following is a list of sanctions on Russia announced at the meeting:

According to the White House, the United States and its allies will sanction three of Russia’s most popular state-controlled television channels: Channel One Russia, Russia-1, and NTV.

“The reality is Western companies were among the top advertisers on these stations last year,” a senior administration official told reporters during a call on May 8. These stations received more than $300 million worth of advertising money in 2021, the official said.

While most companies have cut their business activities in Russia after the invasion of Ukraine, the official noted, the U.S. government wants to ensure that U.S. media advertisers don’t fund Russian propaganda.

The United States will make it illegal for Americans to provide “accounting, trust, and corporate formation, and management consulting services” in Russia. These services are essential for Russian firms and elites to generate wealth and escape sanctions while also funding “Putin’s war machine,” according to the White House.

“They’ve been asked, we think, by Russian companies to help them figure out how to reformulate their business strategies in the wake of sanctions, in some cases, how to get around these sanctions, or in the case of accountants, how to hide some of their wealth,” the official said. “We’re shutting that down.”

All G-7 countries announced on May 8 that they would either phase out or ban the import of Russian oil.

“This will hit hard at the main artery of Putin’s economy and deny him the revenue he needs to fund his war,” the White House stated in a fact sheet.

However, there are no sanctions against Gazprombank, which is Russia’s primary means of selling gas to Europe.

“We’ve been cautious about shutting down its operations while Europe is still importing gas from Russia,” the senior official said.

The United States will impose export controls on a wide range of products “including wood products, industrial engines, boilers, motors, fans, and ventilation equipment, bulldozers, and many other items with industrial and commercial applications.”

These sanctions are expected to limit Russia’s access to products and revenue that bolster its military capabilities, according to the White House.

“We picked goods, we picked services, we picked technologies that we and the Europeans and the G-7 and our partners in Asia were the dominant suppliers of. And we don’t think Russia has many options other than to try to produce these goods or services domestically,” the official said.

Putin’s war is expected to wipe out Russia’s economic gains over the past 15 years, the White House fact sheet states.

Moscow is having trouble replacing its military weaponry and equipment as a result of export controls imposed by Western countries. Due to a shortage of foreign components, according to the fact sheet, Russia’s two largest tank producers, Uralvagonzavod Corp. and Chelyabinsk Tractor Plant, have ceased production. So far, 1,000 private sector companies have left Russia. And over 200,000 Russians, including highly skilled workers, have fled the country, the White House said.