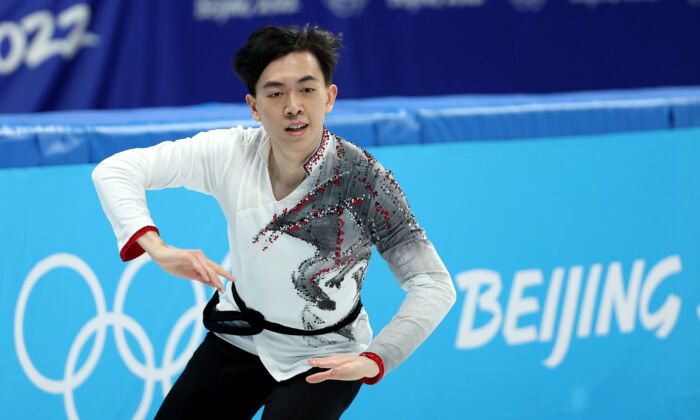 U.S. figure skater Vincent Zhou couldn’t join his team at the Winter Olympics closing ceremony on Feb. 20 after being flagged as a COVID-19 close contact, despite testing negative for the disease more than a dozen times.

“I won’t be marching in the Closing Ceremony tonight,” Zhou wrote on his Instagram story on Sunday. “Before boarding the bus to the stadium, they flagged me as a COVID ‘close contact’ risk and would not allow me to proceed further.”

The 21-year-old California resident expressed his frustration, given every effort he had made to prevent infection.

“I have tested negative 14 times in a row,” the post reads. “I have antibodies and am not contagious whatsoever. I am 100% healthy and normal. I am double-masked and would be walking outdoors with the same people I am about to travel with in a couple [of] hours. Out of everyone marching, I would be the least at risk of transmitting to others.”

Zhou said he only unmasked himself as requested while performing in the end-of-Games exhibition gala earlier on Sunday, before getting barred from the ceremony in the evening.

Yet he congratulated the participants, including his teammates, who marched during the event, saying he was “happy and proud.”

Besides the final event at the Games, Zhou had already been forced to withdraw from the men’s singles event, he said in a video posted on Feb. 7, confirming his positive COVID-19 test.

It came after his team finished in second place in the team figure skating event at the beginning of the Games. The skater had since spent most of his time in quarantine until Feb. 16.

“I’ve isolated myself so much that the loneliness I’ve felt in the last month or two has been crushing at times. The enormity of the situation, just the pain of it all is pretty insane,” Zhou said in a 5-minute video.

“I am more than just another positive COVID test,” he said. “I do recognize this absolutely does not define me as an athlete, as a person.”

This is his second Olympics journey following the 2016 Pyeongchang Winter Games in South Korea.

His team, which came after gold-medal-winning Team Russia, has yet to receive the silver medals due to the undergoing investigation into 15-year-old Russian Kamila Valieva’s failed drug test. The International Olympic Committee refused to reward medals in any event in which Valieva finished in the top three until the case is finalized.

If the victory in the team event of Russia is overturned, the U.S. skaters would receive gold medals.