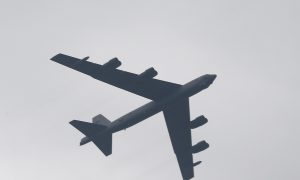 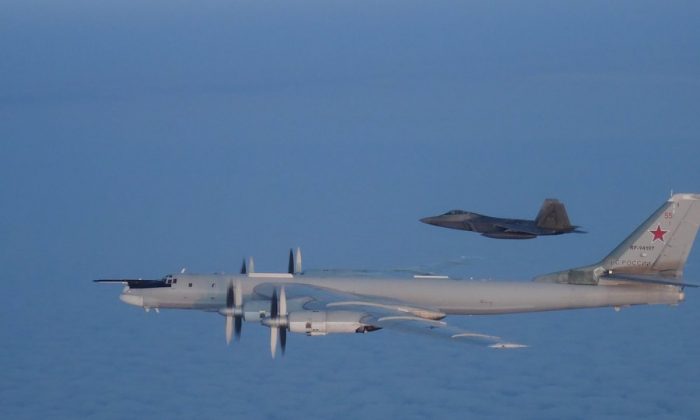 U.S. and Canadian fighter jets intercepted two Russian long-range bombers off the coast of Alaska on Aug. 8, 2019. (NORAD)
US News

U.S. and Canadian fighter jets intercepted two Russian long-range bombers off the coast of Alaska on Aug. 8, according to the North American Aerospace Defense Command, which released images of the encounter.

The Russian aircraft remained in international airspace and never entered the United States or Canadian sovereign territory, the statement added.

Two F-22 and two CF-18 fighter aircraft supported by an E-3 Sentry, a KC-135 Stratotanker and a C-130 Tanker from the NORAD positively identified and intercepted two Tu-95 Bear bombers in the Alaskan and Canadian ADIZ on Aug. 8th. pic.twitter.com/SebmJtMiTu

Russian bomber flights like the one that took place on Thursday are viewed by U.S. military officials as part of Moscow’s effort to train its military for a potential crisis while simultaneously sending a message of strength to adversaries.

U.S. officials say Russian bombers and jets have flown in the area several times a year for the last few years and have similarly been intercepted by U.S. or Canadian jets operating as part of NORAD.

“NORAD’s top priority is defending Canada and the United States. NORAD operators identified and intercepted the Russian aircraft flying near our nations,” said Gen. Terrence J. O’Shaughnessy, the NORAD commander. “Whether responding to violators of restricted airspace domestically or identifying and intercepting foreign military aircraft, NORAD is on alert 24 hours a day, seven days a week, 365 days a year.”

“The Russian aircraft remained in international airspace west of mainland Alaska and at no time did the aircraft enter sovereign United States airspace,” NORAD said in a statement about that incident.

The defense of Canada and the United States is NORAD’s top priority. The Russian aircraft remained in international airspace west of mainland Alaska and at no time did the aircraft enter sovereign United States airspace.

The most recent intercept involving Russian aircraft off the coast of Alaska took place in May when two U.S. F-22s intercepted four Russian bombers and two Su-35 fighter jets that flew into the Air Defense Identification Zone.

The United States also conducts similar flights in international airspace near the Russian coast and has accused Russian pilots of performing unsafe or unprofessional maneuvers during the encounters.

In June, a Russian jet intercepted a U.S. aircraft flying in international airspace over the Mediterranean Sea three times in just under three hours, according to the U.S. 6th Fleet.

The second of the three interactions “was determined to be unsafe” due to the Russian aircraft “conducting a high speed pass directly in front of the mission aircraft, which put our pilots and crew at risk,” the 6th fleet said in a statement at the time.

The Russian military disputed the U.S. Navy’s characterization of the intercept as unsafe.