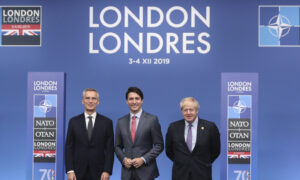 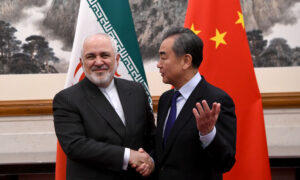 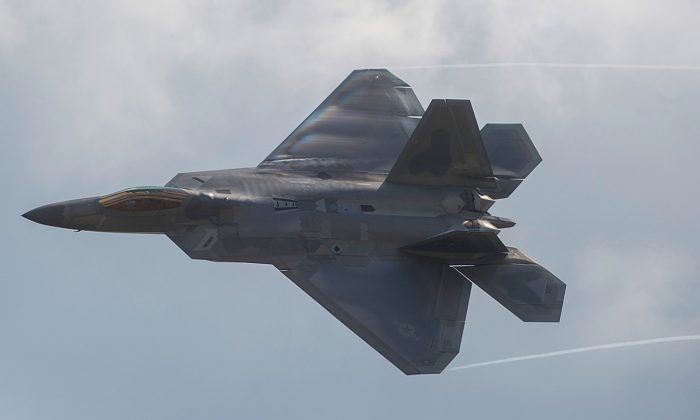 An F-22 Raptor does a fly-by during the airshow at Joint Andrews Air Base in Maryland on Sept. 16, 2017. (Andrew Caballero-Reynolds/AFP/Getty Images)
US News

The head of NORAD, Gen. Terrence J. O’Shaughnessy said that with the latest incident, Russian planes “have penetrated our Canadian or Alaskan Air Defense Identification Zones” for the eighth time so far in 2020.

“Despite the COVID-19 pandemic, NORAD constantly monitors the northern approaches to our nations and our operations make it clear that we will conduct homeland defense efforts 24 hours a day, 7 days a week, 365 days a year,” the general said in a written statement.

They got as close as 32 nautical miles from the coast of Alaska, said officials. The planes, however, didn’t breach American airspace.

The Russian Ministry of Defense posted a video online of their planes taking the planned flight before they were intercepted by the U.S. fighter jets.

The ministry confirmed the U.S. intercept of its aircraft.

“At certain stages of the route, Russian planes were escorted by the U.S. Air Force F-22 fighters,” the ministry said, noting that the flight lasted for about 11 hours, Radio Free Europe/Radio Liberty reported.

Earlier this month, on June 10, NORAD said it scrambled fighter jets to intercept Russian bombers and jets near Alaska.

In May, the U.S. military said two Russian Su-35 fighter jets flew in an unprofessional and potentially unsafe manner while trying to intercept a Navy spy plane over the Mediterranean Sea.

“The unnecessary actions of the Russian Su-35 pilots were inconsistent with good airmanship and international flight rules, and jeopardized the safety of flight of both aircraft,” the Navy said at the time, adding that the incident was “determined to be unsafe and unprofessional due to the Russian pilots taking close station on each wing of the P-8A simultaneously, restricting the P-8A’s ability to safely maneuver.”