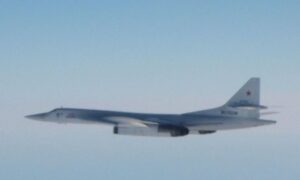 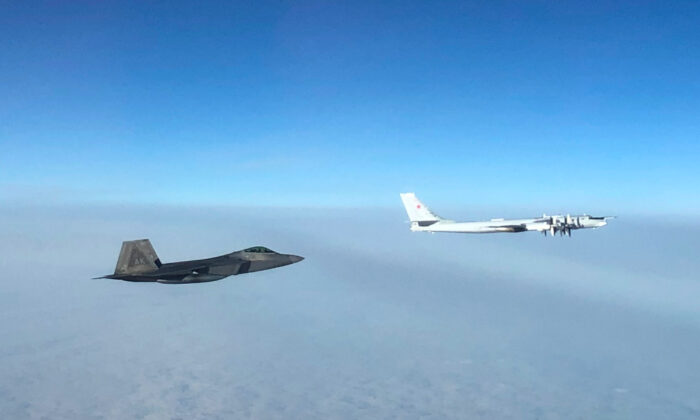 NORAD confirmed in a Tuesday Twitter post that its F-22s, supported by the E-3 airborne warning and control system and a KC-135 “Stratotanker” refueling aircraft, had intercepted two Russian Tu-95 bombers escorted by two Su-35 fighters.

In a follow-up post, NORAD said it had also positively identified a Russian A-50 airborne early warning and control aircraft, which loitered within the Alaskan Air Defense Identification Zone for approximately an hour-and-a-half and came within 30 nautical miles of Alaskan shores.

All the Russian warplanes remained in international airspace at all times and did not enter U.S. or Canadian airspace, NORAD said.

“NORAD forces remain on alert 24/7/365 to respond to potential threats to Canada and the United States,” NORAD Commander Gen. Glen D. VanHerck said on Twitter. “The agility and readiness of our personnel ensures we are successful in addressing potential aerospace threats with the appropriate response at the right time.”

Russia’s Ministry of Defense on Tuesday also published footage of its bomber formations being intercepted near Alaska.

“This year, we’ve conducted more than a dozen intercepts, the most in recent years,” VanHerck said at the time. “The importance of our continued efforts to project air defense operations in and through the north has never been more apparent.”

Air Force Gen. Terrence O’Shaughnessy, the then-NORAD commander, warned in April that Russia’s numerous flights near Alaska were part of an effort to test whether the U.S. air defense system has developed any weaknesses due to the CCP (Chinese Communist Party) virus pandemic.

“We just want to make it very clear to them… there are no vulnerabilities as a result of COVID-19,” O’Shaughnessy said. “We are postured and maintain that ability to respond at a moment’s notice.”