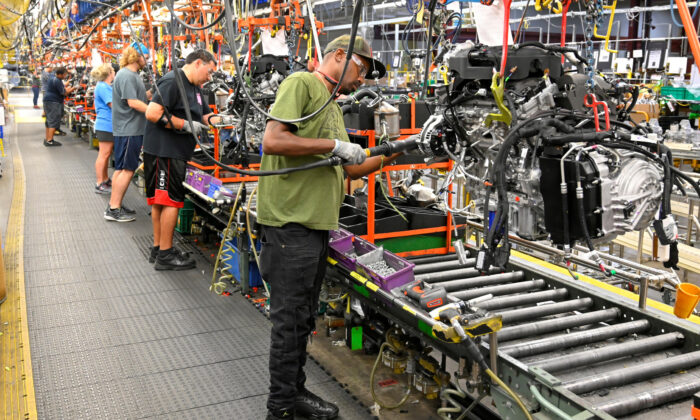 In this file photo, engines are assembled at the General Motors (GM) plant in Spring Hill, Tennessee, on Aug. 22, 2019. (Harrison McClary/Reuters)
US News

US Factory Orders Rebound in October, Hinting at Stabilization of Manufacturing Sector

New orders for U.S. made goods rose in October after two straight monthly declines, an indication that the manufacturing sector may be stabilizing, reported Breitbart.

Factory orders rose 0.3 percent in October, the Commerce Department said Thursday. Data for September was revised down to show orders dropping 0.8 percent instead of falling 0.6 percent, as previously reported. Economists were expecting a rise of 0.2 percent, reported Reuters.

October’s gain in factory orders was in line with economists’ expectations.

However, the growth rate in factory orders is down 1.2 percent year-to-year, according to T.J. Connelly, head of research at Contingent Macro. “Overall, the factory sector showed only hints of stabilization amid a continued downtrend,” Connelly said, reported Market Watch.

Despite the decrease in factory orders compared to October 2018, new order volumes increased at the fastest pace since January, reportedly due to greater marketing activity, and a reduction in hesitancy among customers in placing orders.

Among the increases were machinery, and computer and electronic products, which rose 1.2 percent and 0.6 percent respectively.

Transportation equipment orders rebounded 0.7 percent in October after dropping 3.2 percent in the prior month. Orders for civilian aircraft and parts increased 10.7 percent after decreasing 19.0 percent in September.

Durable goods orders rose a solid 0.5 percent, down slightly from the initial estimate of a 0.6 percent increase. These orders have been up in four of the last five months.

According to the U.S. Manufacturing Purchasing Managers’ Index from IHS Markit, manufacturing grew to a seven-month high of 52.6 in November compared to October, which was at 51.3.

The index’s final reading of 52.6 for November was driven by the strongest improvement in the health of the manufacturing sector since April.

Foreign client demand also increased midway through the final quarter, with an increase in new export orders since June. Greater interest from key export partners has been attributed to this increase.

Coinciding with the higher demand is the increase in manufacturing employment, which rose by 54,000 in November following a decline of 43,000 in October, the Labor Department said.

These figures point to the most substantial expansion in factory activity in seven months, supported by quicker developments in production and new orders, with both domestic and foreign client demand strengthening, according to Trading Economics.

Since taking office, President Donald Trump has placed a focus on deregulating U.S. industry to spur increases in manufacturing and energy production, among other sectors.

Ivan Pentchoukov, Emel Akan, and Reuters contributed to this report.