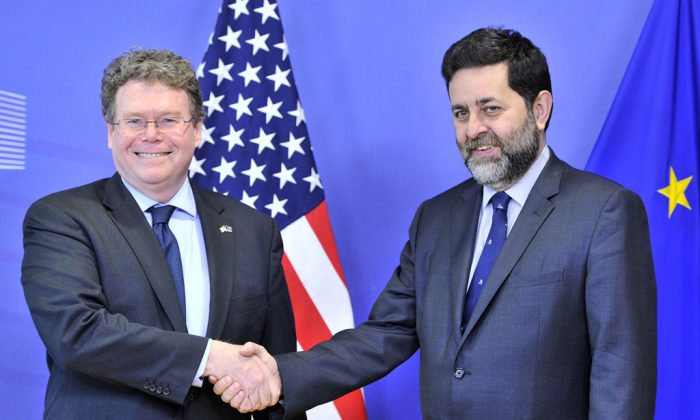 BRUSSELS—The Transatlantic Trade and Investment Partnership (TTIP) could be finalized as early as the end of this year, creating a free trade zone between the United States and the EU.

The European Commission projects overall trade between the two Western partners could increase by 50 percent if the deal goes through, which trade and globalization policy specialist at the U.S. Trade Union AFL-CIO, Celeste Drake, welcomed cautiously.

“It has been pitched as the way out of economic doldrums for both us and EU to increase employment, to increase GDP, and increase wages,” Drake said.

She and other union representatives met with the negotiators of the deal at a roundtable discussion in Brussels on Wednesday, hosted by the European Economic and Social Committee.

What advocates said is that it will increase trade and promises an economic boost for both the United States and the EU, which saw between 0.1 and 3 percent growth in 2013.

But the risk of signing the TTIP, said the unions, is that large corporations could gain even more control, and if governments are not able to sufficiently regulate them, could lead to a deterioration of workers’ rights.

“Our main issue is ISDS, Investor-to-State Dispute Settlement, which is something we do not want to see in the agreement,” said Tom Jenkins, adviser to the European Trade Union Confederation.

“We are interested in how can we get rid of the Investor-to-State Dispute Settlement, how we can make sure that labor standards are not just set at a permanent floor,” he said.

As for the timeline, the union representatives would prefer the process be delayed to give citizens more time to weigh in.

“There is no reason to speed it up. In fact, we say slow down. So that you can open up the process so civil society, workers can participate,” Drake said.

The EU–U.S. trade relationship is already the biggest in the world in terms of volume; every day the trade of goods and services exceeds $2.5 billion.

“The views of employers, employees, and NGOs on this subject are diverging, but we are looking for compromise,” Jacek Krawczyk, rapporteur on the TTIP and president of the EESC Employers’ Group.