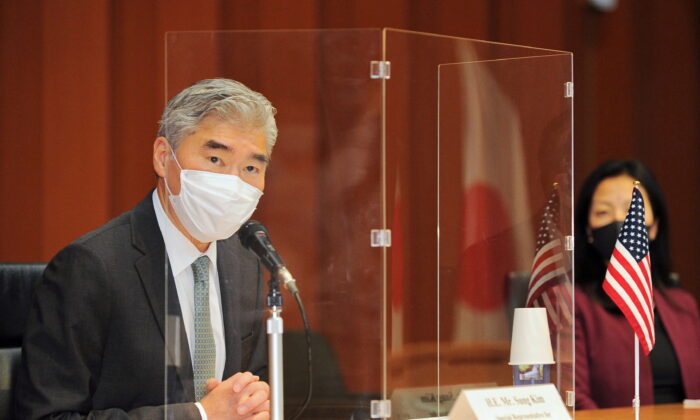 The United States’ special envoy to North Korea has called on China to condemn North Korea’s recent missile launches, which are believed to have involved an intercontinental ballistic missile (ICBM) system, the State Department said Sunday.

The State Department said that special envoy Sung Kim conveyed his strong condemnation of North Korea’s recent launches to his Chinese counterpart Liu Xiaoming in a phone conversation on March 10, saying that they posed “a serious threat to international peace and security.”

“He expressed concern that these launches demonstrate the DPRK’s determination to advance its unlawful weapons of mass destruction and ballistic missile programs and continue an increasingly escalatory path,” it said in a statement, referring to North Korea’s official name.

Kim also called on China to help urge North Korea to cease its “destabilizing activity” and return to dialogue, reiterating the United States’ willingness to resume denuclearization talks that have been stalled since 2019.

“Representative Kim emphasized that the [People’s Republic of China] and the United States share an interest in ensuring regional stability, and he called upon Beijing to join Washington in publicly condemning the DPRK’s missile launches,” it added.

China has been North Korea’s top ally since the two sides signed a treaty in 1961, and also North Korea’s biggest trading partner, accounting for more than 90 percent of its trade volume.

In March last year, North Korean leader Kim Jong Un and Chinese leader Xi Jinping exchanged messages in which they reaffirmed alliance in fighting against “hostile forces.” Xi described the two countries’ alliance as a “common treasure,” and that China would be willing to work with North Korea.

The Biden administration has said it is open to a dialogue with North Korea without preconditions, but North Korea accused Washington of having “hostile policies” such as military drills and sanctions against Pyongyang that it must withdraw before any talks can resume.

The U.S Treasury Department on March 11 claimed that North Korea had conducted 11 ballistic missile launches since the start of 2022, the most recent being on March 4, which Pyongyang’s state-run media said was an attempt to test cameras installed on a spy satellite.

Washington concluded that North Korea’s recent tests on Feb. 26 and March 4 involved a “new intercontinental ballistic missile system” that the Kim regime first unveiled during a military parade in 2020.

“The purpose of these tests, which did not demonstrate ICBM range, was likely to evaluate this new system before conducting a test at full range in the future, potentially disguised as a space launch,” Pentagon press secretary John Kirby said.