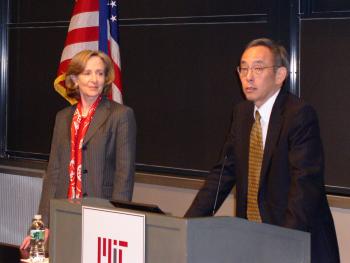 U.S. Energy Secretary Steven Chu and MIT President Susan Hockfield at MIT, where Secretary Chu was the speaker for the Compton Lecture on May 12, in Cambridge, Mass. (Chuan Qin/The Epoch Times)
US

A Framework for the U.S. Energy Challenge

By Michael Tsang
biggersmaller
Print
CAMBRIDGE, Mass.—As the featured speaker for the prestigious Compton Lecture Series at the Massachusetts Institute of Technology on May 12, U.S. Secretary of Energy Steven Chu gave a broad outline of the challenge that lies ahead for America’s energy future.

Secretary Chu is the first working scientist and the first Nobel laureate to serve in a Cabinet position. Unlike in the past, the state of the nation today mandates this position to meet the extraordinary challenge of becoming energy independent. Secretary Chu pointed out that at stake is the nation’s future economic prosperity, with geo-political conflicts that may arise due to competition for natural resources, and the threat of global warming.

MIT President Susan Hockfield pointed out the magnitude of the task: “In its daunting scope and scale, the Department of Energy resembles the challenge of the Apollo program—like it, but raised by a few orders of magnitude in significance and complexity.”

Much of the $34 billion funding allocated will go toward the “largest and most important investment in American science and technology since the Apollo project.” The fruit of this endeavor will not only bring us a “sustainable energy future” but also “a new cycle of innovation-based economy,” she said.

In his lecture, Secretary Chu presented a few frontier developments in sustainable energy. One is technology for virtual building integration. He said that U.S. buildings consume 40 percent of the nation’s total energy consumption. Besides retrofitting older buildings with more insulation, new buildings must incorporate new software that optimizes energy consumption during their design and construction phases as well as during operation. He forecast that if this can start to be implemented by 2012, a 50 percent reduction in energy consumption could be achieved by 2030.

Photovoltaic development—the technology for capturing the energy of the sun by solar cells—may become competitive in 20–25 years. Some developments in this field today include distributed junction nanosolar cells and reel-to-reel printable plastic solar cells. He mentioned that the Helios project at Berkeley Lab is working with artificial photosynthesis.

Battery technology and its development are very promising. Breakthroughs are expected in five years, said Chu.

Bioenergy is also a developing science. This involves the reprogramming of biology systems by using synthetic biological methods. Recent developments include using yeast and E. coli to synthesize gasoline, diesel, and other fuel.

Chu also mentioned carbon capture and sequestration. This technology is used to capture CO2 from fossil fuel-based power generation to lessen the impact on climate change.