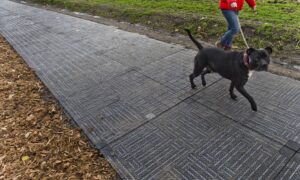 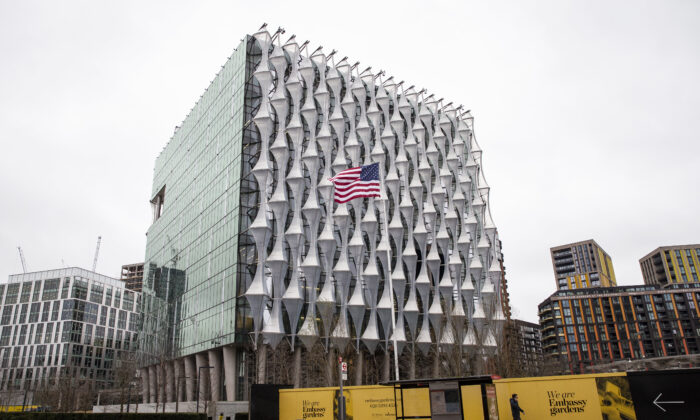 US Embassy in London Suffers From Originality and Other Vices

The new American Embassy in London is not, perhaps, the ugliest modern building in the world, but it would deserve honourable mention as a runner-up in any competition to find it, notwithstanding the thousands of potential entries from every continent.

Its architect, evidently straining after originality, has designed something that is not to be found elsewhere, though at the same time is not unprecedented.

Such straining after originality, in fact, is commonplace, that is to say profoundly unoriginal; personally, I would place any modern architect who strains after originality, that is to say the attempt at novelty for its own sake, under preventive detention, to forestall further uglification of the world. In this case, it would be hard to design a building that did more to undermine the prestige of the United States.

Originality is no virtue in architecture, any more than is bravery in conduct (since it is perfectly possible to be brave in pursuit of the worst possible causes).

And yet originality, or some cognate quality, is constantly touted—by architects and architectural critics, that is, seldom by the public—as if it were a virtue by itself, as if originality trumped all other possible considerations or objections.

Here, for example, is a statement taken from an article in the Architectural Digest, about the Guggenheim Museum in Bilbao, designed by Frank Gehry: “What the building does so well is leap past the idea that architecture should be contained by notions of harmony or symmetry. It breaks down the archaic rules in favor of something more exciting.”

This is a fairly typical example of modern antinomianism, an unthinking and uncritical rejection of rules as such, that is to say rules as intrinsically unjustified or arbitrary limitations on human freedom. How often do we read of the supposedly last taboo being broken, as if the breaking of taboos were ipso facto a huge advance for mankind?

It is true that taboos can be absurd or even oppressive, but that is not the same as saying that taboos as such are wrong. I would prefer there to be an effective taboo on the torture of children than to let every sadist have his head in the name of breaking the last taboo.

I suspect that the author of the passage I have quoted mistakes harmony for uniformity when, of course, it is no such thing. A glance at King’s College chapel and Gibbs’ Building should be enough to persuade anyone of this. Two buildings could scarcely be more different in style, and yet they are wonderfully harmonious.

Harmoniousness has long and rightly been considered a desirable quality in the environment constructed by humans for themselves. The desire for it is almost instinctive, or at least not always consciously articulated.

When I crossed Africa, passing through very remote districts, I was much impressed by how harmonious architecturally the traditional villages were, even when they were composed of simple huts of mud or straw (in contrast to the towns and cities that strove after modernity as self-consciously as architects now strive after originality).

Only our age has discovered that harmoniousness is an undesirable quality, in effect an affront to our egos because it places limits upon what we can do.

The Evanescence of Excitement

The author of the article from which I have quoted obviously considers excitation caused by a building to be a more important quality than its harmoniousness.

In this, he shows himself to be a true child of his age: and when I say child, I mean child. He wants a building to give him the same feeling as he experienced, aged 6 or 7, on Christmas morning, when he woke to find out what Father Christmas had brought him in the night.

But if he cast his mind back, he would learn that excitement is a very fleeting quality, and what is exciting changes rapidly over time. The former excitement dies away; harmoniousness does not.

Our author continues, using the type of language used all too frequently, alas, by architectural critics nowadays: “By challenging the viewer’s perception of unity and stability, the architect can show that flaws are not only intrinsic in design but powerful and beautiful too. The most talented architects do this by placing forms in conflict with one another, competing as the building evolves into a stunning design—not unlike the powers of nature itself.”

But it is no part of an architect’s job to challenge the viewer’s “perception of unity and stability,” a task that would surely require some further justification as to its value or necessity.

And it is difficult to know what the author means when he says that flaws are intrinsic to design, unless he is claiming that nothing on earth can be perfect by comparison with heavenly perfection.

Even if it were true that no design was perfect, and I am far from certain that it is true, there would be no justification for designing something utterly horrible. After all, a great deal lies between perfection and monstrosity.

Moreover, buildings are not to be considered in splendid isolation, except by the most egotistical of modern architects: Venice is not what it is because every building in it is an imperishable masterpiece that challenges the viewer’s perception of unity and stability, and offers the architectural critic a deal of excitement.

As part of the glorious progress beyond mere harmony, which the author seems to regard as a primitive and retrograde quality happily now superseded, the author offers for our delectation Daniel Libeskind’s Art Museum of Denver, Colorado.

This building is to the eye what a splinter is to the bed of a finger-nail: the discomfort cannot easily be ignored. With its sharp and arbitrary shapes, it is profoundly disturbing and even anxiety-provoking, as a bed of razor blades would be.

Only a psychopath or an utter egotist would consider these desirable qualities in a building. Apparently, the building was “inspired by”—O weasel words!—the nearby Rocky Mountains, but I doubt that anyone would realize this who had not been told it, and would more likely think that the building took its inspiration from a mediaeval iron maiden used to torture heretics.

The building, as so many others by the architectural equivalent of Hollywood starlets, puts me in mind of Shelley’s poem, adapted very slightly: “My name is Daniel Libeskind, king of kings: Look on my works, Ye Mighty, and despair!”