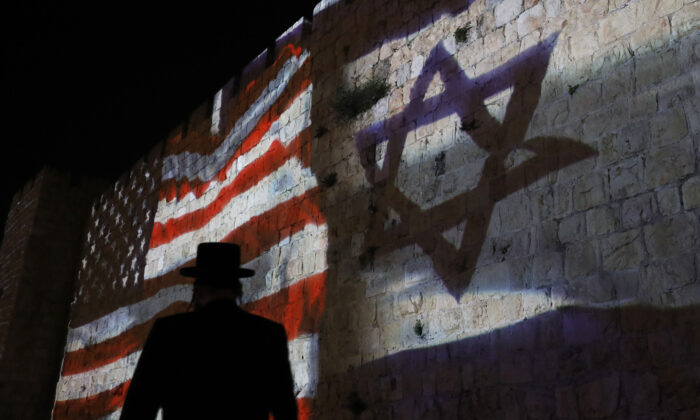 The Israeli and United States flags are projected on the walls of the ramparts of Jerusalem's Old City to mark one year since the transfer of the US Embassy from Tel Aviv to Jerusalem on May 15, 2019. (Ahmad Gharabli/AFP via Getty Images)
Middle East

The U.S. Embassy in Israel warned American citizens of heightened tensions in the Middle East as a flurry of Iranian leaders threatened the United States with reprisals for the killing of General Qassem Soleimani.

The embassy said in a Jan. 6 warning that Americans should stay on the alert “in the event of mortar or rocket fire.”

“Out of an abundance of caution, the Embassy strongly encourages U.S. citizens to remain vigilant and take appropriate steps to increase their security awareness, as security incidents, including rocket fire, often take place without warning,” it stated.

A red alert siren could be triggered by mortar or rocket fire; all such alerts should be treated as real and people should follow instructions from local authorities and seek shelter immediately, the embassy said.

“Know the location of your closest shelter or protected space. U.S. government personnel and their family members may be restricted from traveling to areas affected by rocket activity, sirens, or the opening of bomb shelters,” it said.

Americans should keep a low profile, stay alert when in areas known as tourist hubs, avoid all demonstrations, and keep tabs on local media, authorities said.

Israel, a strong U.S. ally, has mostly kept quiet since the United States took out Soleimani and other Iranians in the strike near Baghdad International Airport.

The alert came a day after Mohsen Rezaei, a former chief of Iran’s Revolutionary Guards Corps, told a Hezbollah-linked media that Iran could strike Tel Aviv and Haifa if the United States responds to Iran’s expected retaliation for Soleimani’s killing.

“If Trump retaliates to Iran’s revenge, we will strike Haifa, Tel Aviv and wipe out Israel,” Rezaei told AL-Manar News on Sunday, the Jerusalem Post reported.

“The assassination of the martyr General Soleimani established a new revolution in Iran against America,” said Rezaei, adding that Iranian officials are “very serious” about avenging Soleimani’s death.

On Twitter shortly after the death, he claimed Israel passed the United States information about Soleimani’s whereabouts.

Trump has repeatedly warned Iran that the U.S. military will respond to any further attacks by the country. Iran-backed militias killed an American contractor, sparking U.S. airstrikes on a militia in Iraq and Syria, which led to Iran-backed militias attacking the U.S. Embassy in Baghdad. The killing of Soleimani came after the chain of events, which included several attacks on the U.S. over the summer of 2019.