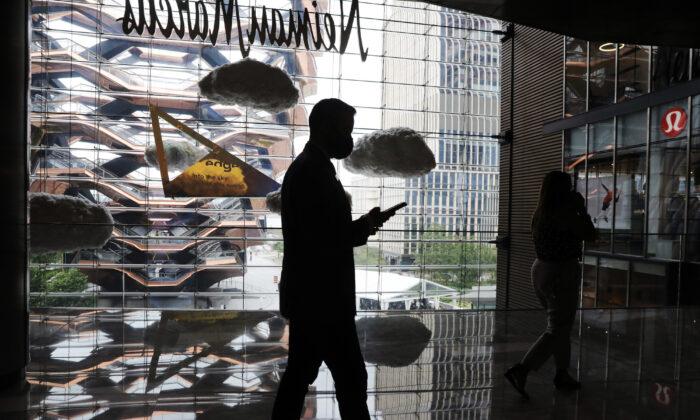 The silhouette of a person holding what seems to be a smartphone is seen in a shopping mall in New York on Sept. 09, 2020. (Spencer Platt/Getty Images)
Economy

The U.S. economy contracted at an annualized pace of 1.4 percent in the first quarter, well below market expectations of 1.1 percent growth.

The gross domestic product (GDP) data, reported on April 28 by the U.S. Commerce Department, mark the first negative growth since the second quarter of 2020 and a dramatic reversal from a 6.9 percent increase in the previous quarter.

The decline in GDP was driven by a drop in private inventory investment, exports, and federal, state, and local government spending. Imports rose in the three months ending in March.

Personal income advanced $268 billion in the first quarter, while disposable personal income climbed to $216.6 billion. The personal savings rate tumbled to 6.6 percent, down from 7.7 percent in the previous quarter.

The negative growth was mainly driven by a sharp decline in net exports, which subtracted more than 3 percentage points from GDP growth. Slower inventory gains (minus 0.84) also contributed to the decline. Government spending shrank mostly because of lower defense spending on intermediate goods and services, slashing growth by another half-percentage point.

“On a positive note, spending by consumers and businesses continued at a healthy pace,” Scott Anderson, chief economist at Bank of the West, wrote in a note.

Consumer spending, which accounts for a significant portion of U.S. GDP, increased at an annualized 2.7 percent rate, while business equipment investment jumped by 15.3 percent.

The White House had braced reporters for slower economic growth to start the year, citing a drop in business inventory accumulations. But an administration official told Reuters that “economic conditions are still very, very strong.”

Another senior administration official told CNBC that the U.S. economy would witness strong GDP growth this year, despite inflation risks and the global supply chain crisis.

“When you put it all together, the U.S. economy is in a strong position, even as we face some additional risks in the months ahead,” the person said.

What the Experts Predicted

For weeks, financial experts had been anticipating an abysmal GDP reading for the January to March period. Economists polled by Reuters had penciled in a 1.1 percent jump in the first-quarter GDP.

Earlier this month, the Conference Board projected that the GDP growth rate would slow to an annualized rate of 1.5 percent, alluding to Russia’s invasion of Ukraine, tighter monetary policy, higher inflation expectations, and a reduction in consumer purchasing power.

While the organization doesn’t expect a recession this year, it’s concerned about the multiple factors that might lead to a contraction in growth, particularly the U.S. central bank’s mistakes, a resurgence of COVID-19, and soaring commodity prices.

Morgan Stanley’s formal projection was 0.6 percent, although it didn’t entirely rule out a negative print in GDP growth for the first three months of 2022.

“A negative print in GDP growth in the first quarter, should it actually happen, would likely be due to two volatile components in the national income and product accounts: net exports and inventories,” the bank said in a research note. “The underlying growth momentum in the economy appears to have remained reasonably solid in the first quarter.”

The central question that many have is whether a recession is on the horizon.

In recent weeks, many Wall Street firms have raised their recession odds. The debate also seems to be on the severity of a contraction, with some projecting a considerable decline and others calling for a modest drop in GDP.

“I wouldn’t assume the next recession will be as deep as the last two, we’re probably overdue for a more garden-variety downturn,” Nick Reece, a portfolio manager at Merk Investments, said in a research note.

Deutsche Bank is more skeptical of the post-pandemic economy, saying the United States should be prepared for a significant economic downturn.

With the Federal Reserve likely to become more aggressive in tightening monetary policy through a blend of rate hikes and balance sheet reduction, the financial institution stated that the financial upheaval in response to these developments “will push the economy into a significant recession by late next year.”

“We will get a major recession, but our strongly held view is that the sooner and the more aggressively the Fed acts, the less longer-term damage to the economy there will be,” Deutsche Bank economists, including David Folkerts-Landau, the group chief economist and head of research, wrote in an April 26 report.

Goldman Sachs raised the chances of a recession to 35 percent over the next two years. Bloomberg Economics’ recession-probability model estimates a 44 percent chance of a recession before January 2024. Merk Research put the odds of a downturn at 1 in 3.

Fed Chair Jerome Powell has repeatedly stated that his objective is to achieve a soft landing: trim inflationary pressures while averting an economic downturn and higher unemployment.

According to the CME FedWatch Tool, the market is betting on 50-basis-point rate hikes at the next two Federal Open Market Committee policy meetings.

What Does This Mean for Wall Street?

It’s earnings season for Wall Street, so investors are placing more of a focus on corporate quarterly reports, with price inflation and supply chain snafus. There are also growing concerns surrounding reduced demand, which could be the main challenge for companies in the coming months.

For an economy that’s two-thirds consumption, this could dampen future GDP forecasts.

“The question into the future is how the cost of goods and energy will play into future earnings,” Marc Scudillo, managing officer at EisnerAmper Wealth Management, told The Epoch Times.

“Prices have gone up significantly in a short period of time for companies, and it will soon play out to see if the increases passed to the consumer will reduce demand, and hence future company earnings. We are planning for continued volatility and setting the tone for clients to anticipate a more challenging market.”

The financial markets have endured considerable weakness thus far this year. The equities arena could trade sideways “with downside volatility for a while longer,” Reece said.

“I don’t expect a deep and prolonged bear market like that of the early 2000s or Global Financial Crisis,” he wrote in a note. “The last all-time high in the S&P (on Jan 3rd) was inconsistent with past major market tops across several frameworks. Nevertheless, I wouldn’t be surprised if the market chops sideways with downside volatility for a while longer, perhaps through a mild recession that occurs sometime over the next two years.”

U.S. financial markets remained in positive territory in pre-market trading, with the Dow Jones Industrial Average up 200 points and the Nasdaq Composite Index also up 200 points. The S&P 500 added about 1.1 percent. The U.S. Treasury market was up across the board, with investors seeking shelter from sliding economic activity.

The U.S. Dollar Index (DXY), which measures the greenback against a basket of currencies, skyrocketed by 0.83 percent to 103.81, adding to its year-to-date rally of more than 8 percent.