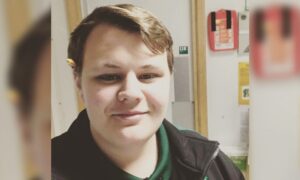 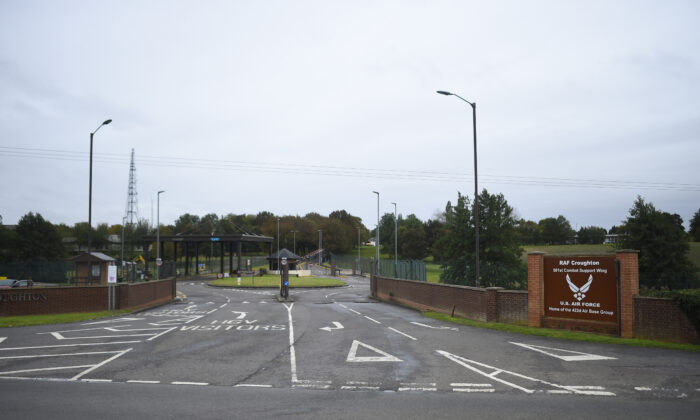 A general view of RAF Croughton near Brackley, England, on Oct. 7, 2019. A motorcyclist, Harry Dunn, 19, was killed in a collision with a car on Aug. 27 on the B4031 near RAF Croughton. (Peter Summers/Getty Images)
UK

The U.S. diplomat’s wife accused of killing 19-year-old Harry Dunn in a 2019 wrong-way crash before leaving the UK under diplomatic immunity was “employed by an intelligence agency in the U.S.” at the time, a U.S. court was told.

Anne Sacoolas and her husband Jonathan worked for the U.S. State Department and left the UK three weeks after the accident due to “issues of security,” Sacoolas’s lawyer told the Alexandria district court of Virginia on Feb. 3, noting their employment was “especially a factor” in their decision to leave, according to the Press Association.

Sacoolas, 43, was allegedly driving on the wrong side of the road on Aug. 27, 2019, when she hit the teenager on his motorcycle near RAF Croughton, a Royal Air Force airbase where her husband worked as a technical assistant.

The revelation that Sacoolas was working for U.S. intelligence services emerged during her application to dismiss a civil claim for damages currently being made against her by Dunn’s family.

Sacoolas’s lawyer, John McGavin, said he could not respond “completely candidly” when prompted by the judge as to why she “fled” the UK, according to the BBC.

“I know the answer, but I cannot disclose it,” he said.

In an interview with Sky News on Feb. 4, Dunn family spokesman Radd Seiger described the hearing as “potentially a gamechanger.”

“What we’ve just heard today, in a completely unrelated court hearing, by her lawyer in open court … he admitted that she was employed by the American intelligence services,” Seiger said.

A 1995 RAF Croughton agreement between the U.S. and UK governments waived diplomatic immunity for the actions of U.S. staff beyond their duties. However, Sacoolas was considered not to be affected by the waiver as she was only the dependant of a staff member.

Sacoolas left the UK three weeks after the accident, and her lawyer later said she would not return voluntarily to face charges of causing death by dangerous driving.

A Home Office extradition request was turned down by then-U.S. Secretary of State Mike Pompeo under the Trump administration on Jan. 23, 2020, which contended that Sacoolas had diplomatic immunity.

The denial was made “final” by the new Biden administration in a call between U.S. Secretary of State Antony Blinken and UK Foreign Secretary Dominic Raab on Jan. 27, 2021.

Dunn’s family had gone to the UK High Court to challenge the determination of diplomatic immunity. They also alleged the Foreign Office broke the law in advising police that Sacoolas had immunity.

On Nov. 24, 2020, the court ruled in the government’s favour, saying that Sacoolas had immunity, that it had not been expressly waived, and that advice given to police was thus correct.

In reaction to the latest news, the prime minister’s official spokesman denied knowledge of Sacoolas’s alleged employment. “She was notified to the UK government by the U.S. as a spouse with no official role,” he said, according to The Times of London.

“We have consistently called for her diplomatic immunity to be waived and believe that the U.S. refusal to extradite her amounts to a denial of justice.”

Dunn’s mother, Charlotte Charles, said in an ITV News interview on Feb. 4, “We’ve been asking that question right from the beginning of the campaign: Was she employed at the time of the crash? Enough is enough now. I need justice for my boy.”

In an international opinion poll by YouGov, posted on Seiger’s Twitter account, when asked whether Sacoolas’s immunity should be waived, 84 percent of Brits said yes, while in the United States, 63 percent said yes.

The case has been adjourned until a Feb. 17 hearing at the same court.