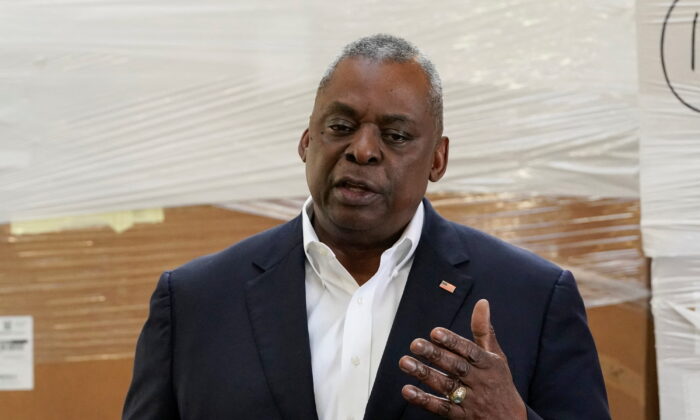 U.S. Secretary of Defense Lloyd Austin speaks with reporters after returning from their trip to Kyiv and meeting with Ukrainian President Volodymyr Zelenskiy, near the Ukraine border, in Poland, on April 25, 2022. (Alex Brandon/Pool via Reuters)
Russia-Ukraine War

US Defense Secretary Speaks With Russian Counterpart for First Time in Months: Pentagon

U.S. Defense Secretary Lloyd Austin held his first phone call with Russian Defense Minister Sergei Shoigu since the start of the Russia-Ukraine conflict, according to the Pentagon on Friday.

Austin, according to a Pentagon readout of the call, “urged an immediate ceasefire in Ukraine and emphasized the importance of maintaining lines of communication.” The statement, which said it’s the first time the two have spoken since Feb. 18, did not provide more details.

Shoigu later confirmed the phone call with Austin, according to Russian state-run media, saying that the two spoke about the Ukraine conflict, which Russian officials have described as a “special military operation,” and other undisclosed security matters.

It comes as the United Kingdom announced Friday it has imposed sanctions on individuals close to Russian President Vladimir Putin, including his ex-wife.

The UK sanctioned Putin’s ex-wife, Lyudmila Ocheretnaya, and Putin’s reported girlfriend, gymnast Alina Kabaeva, as well as several others, including Kabaeva’s grandmother, Anna Zatseplina, according to a statement.

“Alina Kabaeva, a retired Olympic gymnast. Kabaeva has risen to become Chair of the Board of the National Media Group, reportedly the largest private Russian media company,” the UK said. “She is alleged to have a close personal relationship with Putin, and previously sat as a Deputy in the Duma for Putin’s United Russia.”

Other sanctions targeted Putin’s blood relatives, including Igor Putin, the first cousin of the president and a Russian businessman who is the head of Pechenga International Sea Port; Mikhail Putin, another relative of Putin who holds major positions at Russian energy giant Gazprom and insurance carrier SOGAZ; Mikhail Shelomov, a cousin of Putin and a shareholder of the Kremlin-tied Bank Rossiya; and Roman Putin, a first cousin once removed of Putin whose company, Putin Consulting.

“Today’s sanctions isolate the family members and financiers deep within Putin’s inner circle,” the UK said, adding that the economic penalties were handed down due to Russia’s invasion of Ukraine.

Several other individuals with close ties to Putin were also sanctioned Friday by the UK, the statement said. In the past two months or so, the UK has sanctioned more than 1,000 individuals and 100 entities, including several top Russian oligarchs.

Russian officials have not issued a response to the UK’s latest round of sanctions. Other than the UK, the United States and European Union countries have similarly levied significant sanctions against Russia’s economy and individuals who are close to Putin.

The British defense ministry said in a Friday statement that Russia was investing significant military effort near Severodonetsk and Izium, and trying to break through towards Sloviansk and Kramatorsk to complete their takeover of Ukraine’s industrial Donbas region. Russian-backed separatists said they had taken the Zarya chemical plant in Rubizne near Severodonetsk.