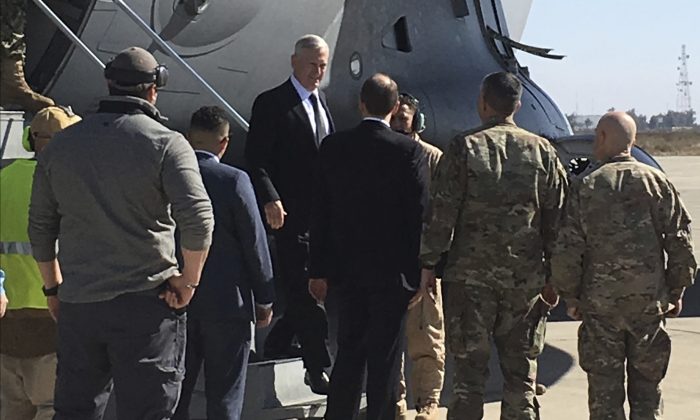 US Defense Secretary Mattis: US Will Stay in Iraq a While

BAGHDAD—U.S. Defense Secretary Jim Mattis said Monday he believes U.S. forces will be in Iraq and in the fight against the ISIS terrorist group for a while.

Speaking at the end of a day of meetings in Baghdad with military commanders and Iraqi political leaders, Mattis said he is open to any request from his military commanders to aid the battle to retake Mosul and launch a major battle to oust ISIS from the base of its so-called caliphate in Raqqa, Syria. He would not provide details.

Mattis said his meetings with Iraqi leaders underscored the partnership the United States has with the Iraqis.

He said there’s no doubt that “the Iraqi people, the Iraqi military and the Iraqi political leadership recognize what they’re up against and the value of the coalition and the partnership, in particular with the United States.”

His optimistic words come on the heels of his earlier declaration that the U.S. does not intend to seize Iraqi oil, something that President Donald Trump mentioned in the past while lamenting the United States allowing ISIS to seize control of it.

“I think all of us here in this room, all of us in America have generally paid for our gas and oil all along, and I’m sure that we will continue to do that in the future,” Mattis told reporters traveling with him. “We’re not in Iraq to seize anybody’s oil.”

Mattis and Lt. Gen. Stephen Townsend, the top U.S. commander in Iraq, described an enduring partnership between the U.S. and Iraq.

“I imagine we’ll be in this fight for a while and we’ll stand by each other,” Mattis said.

Townsend, who was standing by Mattis, declined to say how long the U.S. military will stay in Iraq. But, he said, “I don’t anticipate that we’ll be asked to leave by the government of Iraq immediately after Mosul.” He added, “I think that the government of Iraq realizes their very complex fight, and they’re going to need the assistance of the coalition even beyond Mosul.”

Townsend also acknowledged that U.S. forces are now operating closer and deeper into the fight with Iraq units as the battle to retake western Mosul entered its second day.

He said the change began in recent months during the successful fight to take back eastern Mosul, and is now happening more often. U.S. special operations forces have been working with the Iraqis, offering advice and assistance, but initially they were only at the headquarters’ level.

More recently they have been moving closer to the battlefront, working with brigade, battalion and sometimes smaller units. But they are generally with command and control units, not in combat on the front lines.

“We embedded advisers a bit further down into the formation,” Townsend said.

Mattis’ unannounced one-day stop in Iraq was his first as Pentagon chief and the first visit to the warzone by a senior member of the Trump administration. It comes as Mattis and his military leaders are nearing the end of a 30-day review of the ISIS fight. He must send Trump a strategy to accelerate the battle in the next seven days.

Senior U.S. military officers said Monday that the fight in the more urban, heavily populated areas of western Mosul will require more precision airstrikes and probably smaller bombs that can take out a building or group of fighters and leave surroundings intact.

Lt. Gen. Jeff Harrigian, the top Air Force commander in the Middle East, said troops responsible for calling in airstrikes are closer to the fight and can move forward with Iraqi units. They also have greater authority now to speak directly to pilots in the aircraft overhead, allowing them to launch strikes more quickly, he said.

Military leaders, said Harrigian, realized they could be more responsive now because the troops have built up trust with their Iraqi partners.

While Mattis and Townsend wouldn’t talk about any future changes or accelerants in the war fight, various military options have been discussed in recent months. Among them: putting more troops in Iraq and Syria and boosting military aid to Kurdish fighters backed by the U.S.-led coalition.

US Commander: Mosul and Raqqa Should Be Retaken in 6 Months

The Pentagon also would like more freedom to make daily decisions about how it fights the enemy. Current and former U.S. officials discussed the likely options on condition of anonymity because they weren’t authorized to talk publicly.

In Syria, a possible option would be to send more U.S. forces, including combat troops, there as the Raqqa fight heats up.

Another move would be to provide heavy weapons and vehicles to the U.S.-backed Syrian Kurds, and boost training. They have been the most effective force against IS in northern and eastern Syria, but the proposal is sensitive. Turkey, a key U.S. and NATO ally, considers the group a terrorist organization.