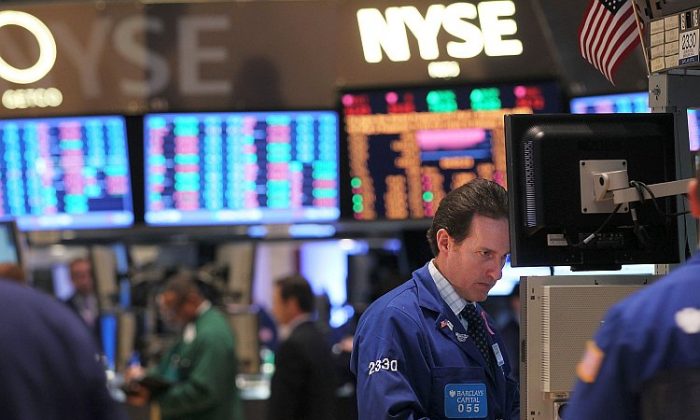 U.S. corporate growth expectations for the second quarter of 2022 are beginning to show signs of decline as the cost of energy, goods, and interest rates continue to rise, say economists.

With companies reviewing data from their first quarter earnings reports, analysts at the end of last week lowered their overall forecast for S&P 500 second-quarter profit growth to 5.6 percent from 6.8 percent at the start of April, while the full-year forecast held firm at 8.8 percent, according to data from Refinitiv.

Financial analysts are expecting the aggregate shares of the five top performing companies in the tech sector to lose value within the next 12 months below the earlier projections from the beginning of the year.

The share-price targets for Meta Platforms, Apple, Amazon.com, Netflix, and Alphabet have fallen by more than 17 percent on average in 2022, for the first major decline the measure has faced on record.

The disappointing outlook from tech giants stood out amid other recent reports, as the previous quarter’s estimated year over year profit growth rose to 10.4 percent from 6.4 percent, according to Refintiv’s latest IBES data.

Amazon.com experienced its worse quarterly report and outlook in 20 years, after it was hit with rising operational costs and poor online sales growth, with the average 2022 earnings per share estimate falling more than 50 percent over the past month, according to Bloomberg.

Alphabet saw its estimates drop 1.7 percent over the same period, with a disappointing first quarter report that fell short of previous expectations, while Microsoft and Meta Platforms have seen little change.

Apple warned investors that supply constraints due to factory lockdowns in China may affect its future sales, but it remains the only one of the five big tech companies for which analysts raised their average price target this year.

Netflix’s stock market value surpassed Walt Disney at the end of last year as the streaming race heated up, but has since reported two consecutive disappointing quarters.

It has since hit a new historic low with the worse losses in a decade, losing over 200,000 subscribers from its platform in the first quarter, costing the streaming service billions of dollars in losses.

Netflix’s stock has fallen 70 percent this year, the biggest drop in the S&P 500 index, with its market value now standing at $80.4 billion compared to Disney’s $200.8 billion.

Some analysts believe that the big five on the Nasdaq 100 Index are still too overvalued, with Amazon at the top, trading at about 40 times estimated earnings, Apple at 25, Alphabet and Netflix each at 16, and Meta at 14.

Stocks have slumped in recent weeks after the Federal Reserve announced that it will take an aggressive stance on interest rates to tame surging inflation, worrying investors and sparking fears of an economic slowdown.

The Federal Reserve announced a second round of rate hikes with an increase of 50 basis points on May 4, with further hikes expected later this year.

The Nasdaq 100 has fallen 22 percent since the beginning of the year, exposing the vulnerability of high growth securities, such as big tech, to increases in the interest rates.

Though analysts have ratcheted back their earlier optimistic assessments, the forecasts for big tech stocks still show an average climb of 48 percent by 2023.

The Nasdaq 100 is projected to climb 33 percent over the same period, with the S&P 500 estimated to rise 25 percent.

Higher oil prices have boosted forecasts for energy company earnings while feeding into concerns about profit margins for many other S&P 500 sectors.

However, without the energy sector’s growth, the S&P 500’s 2022 growth estimate falls to about 5 percent, a sizeable impact for an industry that accounts for just 4 percent of the market’s capitalization.