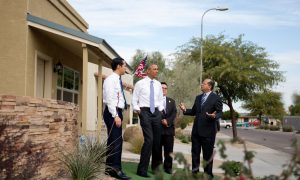 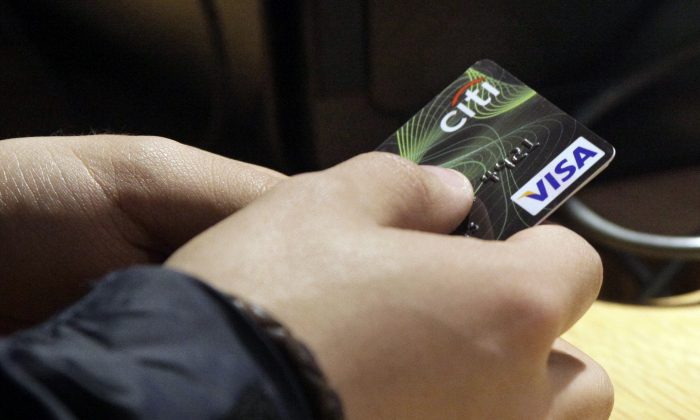 A Visa credit card is tendered at opening of the Superdry store in New York's Times Square on May 9, 2012. The Federal Reserve releases its November report on consumer borrowing on Thursday, Jan. 8, 2015. (AP Photo/Richard Drew)
Business

US Consumer Debt up $14.1 Billion in November

WASHINGTON—U.S. consumers increased their borrowing in November, as stronger demand for auto and student loans offset a drop in credit card debt.

The Federal Reserve said Thursday that consumer borrowing rose by $14.1 billion following a $16 billion increase in October. The gains have pushed consumer debt excluding real estate loans to a record level of $3.3 trillion.

The latest figures suggest that an improving economy and strong employment gains over the past year may be making consumers more comfortable with ramping up their borrowing.

The category that includes credit card debt fell by $946 million after an increase of $1.48 billion in October. The decline was outweighed by a $15 billion increase in the category that covers auto and student loans. Borrowing for education and cars has risen rapidly this year.

The Fed’s monthly consumer credit report excludes mortgages and other loans secured by real estate. It also does not immediately provide separate data for auto loans and student loans for November.

But a quarterly report issued by the New York Federal Reserve Bank that tracks all types of consumer borrowing shows that total household debt, including home mortgages, increased by $78 billion in the July-September quarter to $11.7 trillion.

That is still slightly below the peak for total debt of $12.7 trillion reached in the third quarter of 2008 amid a deepening recession and job losses that prompted households to cut back on their borrowing.

Because of the severity of the recession, consumers had been more hesitant about adding to debt. In particular, mortgage debt has been slower to recover after millions of homeowners lost their homes to foreclosures and banks tightened lending standards.

But economists say that a stronger labor market may be setting the stage for increases in borrowing as consumers grow more confident about the future.

The November increase in the Fed’s monthly credit survey put total borrowing 7 percent above where it was a year ago. Auto and student loans are up 8.4 percent, while credit card debt has risen a much smaller 3.4 percent from year-ago levels.

The big rise in auto loans reflects the strong sales year enjoyed by automakers. Student loans have been surging since the recession ended as many people who could not find jobs decided to go back to school to improve their job skills.

But there is a concern that young Americans are being saddled with debt that will keep them from buying homes or spending as previous generations have been able to do after college.