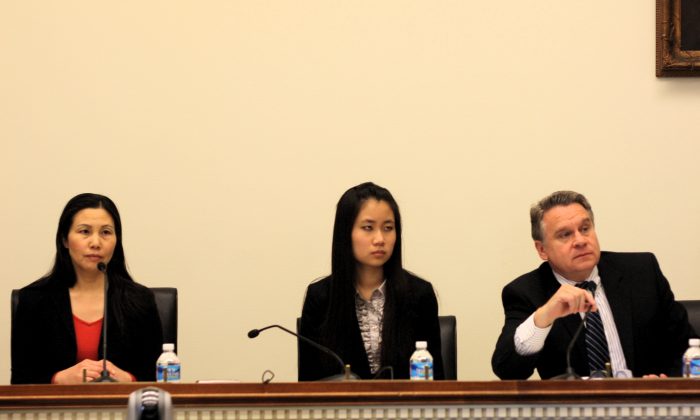 WASHINGTON—The wife and daughter of Chinese human rights activist Guo Feixiong, who has been in detention for the last two months for his activism, joined Congressman Christopher Smith (R-NJ) on Tuesday in calling on the Chinese communist authorities to release Guo, and on the Obama administration to put pressure on the Communist Party to gain his release.

“This is an emergency meeting. When I heard Guo’s wife’s impassioned plea, we were persuaded that we had to leave no stone unturned to effectuate his release,” Rep. Smith said in a press event held shortly before an official hearing in the same room.

Smith said that they wanted the Beijing regime to release “this brave, heroic individual, who has done nothing wrong,” and that they also wanted President Obama to identify Guo by name and demand that the authorities release him.

Guo was taken away by the Communist Party’s security forces on Aug. 8; the political police violated their own rules, however, when they failed to inform his family for nine days. They should have told them within 48 hours, according to Chinese law.

In September Guo, whose legal name is Yang Maodong, was formally arrested, and charged with “suspicion of assembling a crowd to disrupt public order,” a flexible charge used by the authorities to punish dissidents.

Specifically, Guo had made a speech about the importance of a free press during protests outside the building of the Southern Metropolis Daily newspaper, based in Guangzhou. The paper had days previously had one of its editorials heavily censored by a provincial propaganda commissar.

Guo has for years been a human rights activist and organizer, helping such dispossessed groups as persecuted Falun Gong practitioners and residents who have been evicted and had their homes demolished. Previously he was an author and businessman.

The August arrest was the seventh time that Guo has been arrested for his activism. Over the years he has been beaten and tortured in custody; according to Zhang Qing, his wife, the police at one point attacked his genitals with electric batons. “But Guo Feixiong will absolutely not surrender,” she said.

Zhang has herself been a political asylee since 2005; she currently lives in Texas, from where she has written open letters about Guo’s treatment and torture in custody.

Yang Tianjiao, Guo’s 17-year-old daughter who has also been in the United States for a number of years, also spoke at the hearing and press conference.

“I have not seen my father in seven years,” she said in an American accent. “He’s been captured by the government again. I wish the Obama administration and the American government can give some pressure to the Chinese government, to give him the freedom that he wants and the freedom for which he fights for others.”

Zhang said she would like President Obama to specifically mention Guo’s name in a public statement calling for his release. Along with that, she suggested that American consular officials in Guangdong, a southern province of China, should make particular efforts to see Guo. She has been denied access to Guo, and so have lawyers, another violation of Chinese law, she noted.

When asked by a reporter what she would say if President Obama was hesitant to bring up human rights, or Guo’s case, too strongly with China, she said: “I think that the United States should be the lighthouse for human rights in the world. They should speak out about this. They have a duty to do so. It is for the cause of justice.”

Chen Guangcheng, a Chinese dissident now living in the United States, spoke through a cell phone that was held up to the microphone during the hearing. Chen became famous when he escaped from house arrest and was later brought to the United States in May of 2012.

“The Chinese Communist Party is going to continue attacking human rights, so we should not have any illusions about the Party anymore,” he said. Referring to recent legal proceedings by the Chinese authorities against human rights defenders, Chen said it was “a trial between justice and evil.”

The lawless and roguish nature of the security forces’ treatment of Guo prompted a Texas-style comparison from Chad Bullard, a pastor at a church in Midland, Texas, with which Guo’s wife and daughter are affiliated. He and a colleague had traveled with the family to offer support.

“If people in the United States committed kidnapping and torture, they would be going to prison for years,” he remarked during the press conference. “Or would even be executed.”

“That comes from a former police officer,” he added. Bullard said afterwards that he was a federal police officer in Washington, D.C., and Midland, Texas, for 14 years.