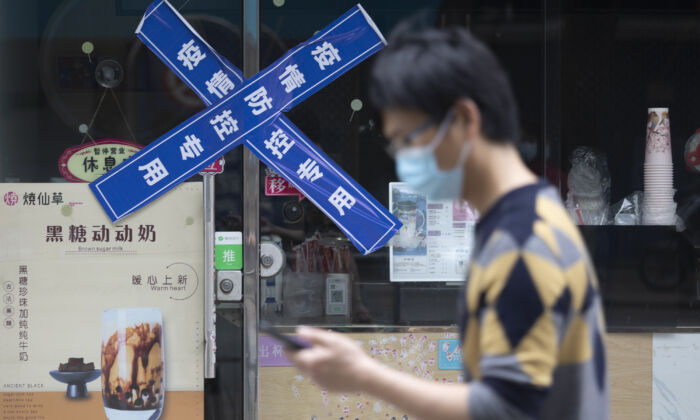 A man walks in the street during a scheduled COVID lockdown break in Shanghai, China, on May 23, 2022. (Hu Chengwei/Getty Images)
Thinking About China

“Conditions in China are such that we have virtually no ability to predict our performance in China in the back half of the year,” said Starbucks interim CEO Howard Schultz on May 4, as reported by CNBC.

The lockdown measures in Shanghai and other commercial cities have shut down factories used by Nike, Tesla, and many other American brands. Even factories that remained open had difficulty receiving parts and materials shipments.

Although China’s retail sales were up 3.3 percent for the first quarter, they were down 3.5 percent for March year-on-year. The March retail numbers were the lowest since the pandemic began. In the same month, unemployment hit 5.8 percent, which increased 3 percentage points compared to the month prior.

Last year, 10.7 million students finished university and entered the workforce. Next month, after universities hold their graduations, a similar number of young people will be looking for jobs. Still, their top employment destinations—Shanghai, Shenzhen, and Beijing—are under various degrees of lockdown.

The slowing Chinese economy and the ongoing lockdowns are disrupting the shipment of U.S. goods made in China and decreasing sales of U.S. brands in China.

U.S. moviemakers, who have come to rely on China as one of the world’s largest markets, have taken a hit as thousands of cinemas remain closed. As of April 17, the total box office takes across China was 28 percent below what it was during the same period last year. The five-day May Day holiday is usually one of the biggest box office weekends of the year. This year, it was the lowest.

The recent COVID lockdowns and economic contraction come after several years of an increasing regulatory regimen in China and Chinese leader Xi Jinping’s crackdown on multiple industries. Therefore, it is likely that even after COVID disruptions have ended, public policies dedicated to greater prosperity and wealth redistribution paired with campaigns to make China economically independent will eat into the long-term profitability of American firms in China.

Starbucks China reported that same-store sales were 23 percent lower in the first quarter of this year compared to last year.

Apple forecasts sales in China to be down to $8 billion this quarter, which means a $4 billion loss.

Estee Lauder originally forecasted revenue growth of 14.5 percent this year, but with its fiscal year ending in June, it has downgraded expectations to between 7 percent and 9 percent.

The CEO of Yum Group, which operates American fast food chains KFC, Taco Bell, and Pizza Hut, predicted that unless the lockdowns are lifted, it expects losses in the second quarter. Yum’s March sales were down 20 percent year-on-year.

The list of companies with the greatest China exposure may be surprising. Wynn Resorts, which operates three casinos in Macau, derives 75.2 percent of its revenue from China. Qualcomm, the semiconductor giant, earns 66.6 percent of its revenue in the country. China accounts for 44.3 percent of Texas Instruments’ revenue. The loss in shares has been reflected in these companies’ stock prices as investors become bearish in China.

Analysts report that the combined impact of the U.S.-China trade war, now going into its fourth year, and the ongoing COVID lockdowns are driving foreign companies to abandon China or consider leaving temporarily. A poll by the expat magazine That’s Shanghai found that 85 percent of foreign respondents would rethink their continued stay in China. On the other hand, many companies see maintaining a presence in the world’s largest market as an important business strategy. Of course, if you are not allowed to operate, you cannot make money.

What this all means for the United States and the rest of the world is higher prices and continued shortages. Shelley Simpson, chief commercial officer of B. Hunt Transport Services Inc., told The Wall Street Journal on May 4 that even if lockdowns are lifted soon, the current supply chain disruptions will be felt in America for the entire summer.