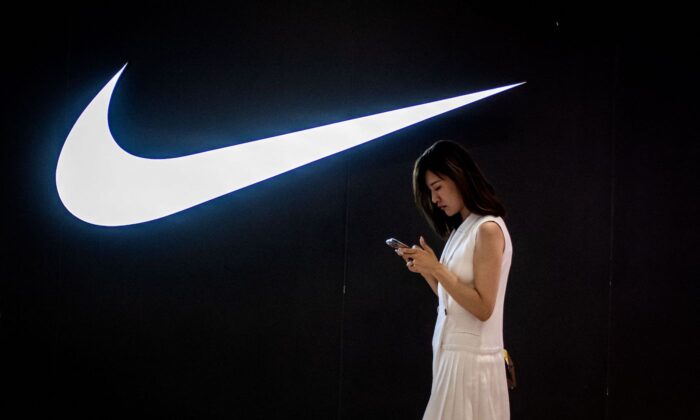 A woman browses her phone while walking past a Nike logo inside a shopping mall in Beijing on June 2, 2021. (Nicolas Asfouri/AFP via Getty Images)
China

US Companies Adapt to Heavy-Handed Network Data Supervision in China

Many U.S. companies have been adjusting their digital services in China due to a tightening of data surveillance by the authorities.

The latest example of a U.S. company responding to online restrictions in China is the American sports shoe brand Nike which announced on June 8 that it would halt its Nike Run Club (NRC) app service.

The NRC app, launched in 2010, had over 8 million registered users in China. The app can record a user’s exercise experience, including outdoor jogging routes and exercise time, while also interacting with others for exercise challenges.

Nike further said it would temporarily discontinue the Chinese version of its SNKRS app that announces Nike’s new and exclusive releases, as well as limit the app’s full upgrades.

Nike did not specify the reason for its discontinuing of the apps but a Nike spokesperson told CNN Business, that the company will be establishing a “localized” platform.

“We are creating an ecosystem from China for China, specifically catered to the region’s unique consumer needs,” the spokesperson said.

Meanwhile, Nike has been shifting to provide its services through WeChat, the most popular social platform in China.

The move by Nike is a part of a trend among large U.S. companies in China with U.S. internet giant Amazon announcing on June 2 that it will shut down its Kindle e-bookstore in the Chinese market by the end of next June.

Airbnb, the U.S. private vacation accommodation rental company, said on May 24 that it would suspend all listings in China from July 30.

Prior to the pandemic, Airbnb’s chief trust officer, Sean Joyce, a former deputy director of the FBI, resigned less than six months into 2019, reportedly due to a controversy over Chinese authorities’ requesting the company share information about its landlords.

In November, Yahoo announced its withdrawal from the China market.

“In recognition of the increasingly challenging business and legal environment in China, Yahoo’s suite of services will no longer be accessible from mainland China as of November 1,” a statement from Yahoo read.

A month earlier, Microsoft’s LinkedIn announced it was shutting down its localized version of LinkedIn citing reasons similar to Yahoo’s while saying they were building another job-related site, then called InJobs, that was suitable for the China market.

“InJobs will not include a social feed or the ability to share posts or articles,” a LinkedIn blog said in October.

InJob ended up being rebranded as InCareer which LinkedIn launched in December for the Chinese market.

Prior to these issues,  LinkedIn, had repeatedly been asked by the Chinese authorities to address “national security issues,” even as it prevented LinkedIn China from publishing “banned content”.

U.S. electric car giant Tesla has also been caught in trouble in China for nearly a year for alleged data security issues with its onboard cameras.

According to a report in The Wall Street Journal on March 19, 2021, Chinese authorities say the data collected by the vehicles could lead to the disclosure of national security information, despite Tesla’s assurances that data from the Chinese market does not leave the territory.

This is presumed to be the reason why the CCP in March ordered the Chinese military and employees of key state-owned enterprises to restrict their Tesla vehicle use.

Tesla vehicles were also banned from parts of Chengdu, the capital city of Sichuan Province in southwest China, during a June 8 visit of CCP leader Xi Jinping.

More recently Reuters reported that Tesla vehicles will be barred from entering the Chinese coastal district of Beidaihe which is the location of a secretive annual CCP leadership gathering, for at least two months starting July 1.

Helen Raleigh, an American entrepreneur and author, wrote the article “Tesla’s Struggle in China is a Warning to all Western Companies” for The Federalist last July, addressing the CCP’s use of various regulations to suppress foreign companies.

“Once the government gets what it wants, foreign businesses will find the market conditions suddenly become unbearable. Their local rivals start using the same technology to deliver products and services cheaper and faster,” Raleigh wrote.

“Government regulators will make foreign businesses’ lives a living hell, and their long-term survival is at risk,” she wrote.