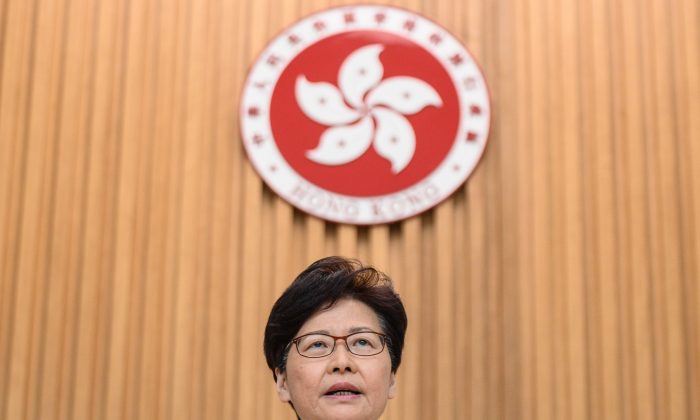 The Congressional-Executive Commission on China issued a statement on Aug. 29 criticizing the Hong Kong government for leaving open the idea of declaring a state of emergency in order to quell ongoing protests.

“Evoking the Emergency Regulations Ordinance or taking steps toward martial law in HongKong is the wrong way to resolve the situation,” the commission stated in an Aug. 29 post on Twitter. It then urged Hong Kong leader Chief Executive Carrie Lam to “respond to the grievances of the people about the extradition law, police violence [and] universal suffrage,” which are part of the five demands that protesters have called for since mass demonstrations against a controversial extradition bill began in June. The bill, which has since been suspended, proposed allowing the Chinese regime to transfer individuals to be trialed in mainland China. It drew widespread opposition as Hongkongers worried that the bill would erode the city’s independent judiciary and leave people vulnerable to China’s opaque legal system.

Evoking the Emergency Regulations Ordinance or taking steps toward martial law in #HongKong is the wrong way to resolve the situation. @CECCgov Chairs urge Carrie Lam to respond to the grievances of the people about the extradition law, police violence & universal suffrage. pic.twitter.com/SCqdYYnbvn

The Emergency Regulations Ordinance, which dates back to almost a century ago, grants the Hong Kong chief executive broad powers to “make any regulations whatsoever which (they) may consider desirable in the public interest” during “occasions of emergency or public danger.”

That includes declaring curfews, censoring the press and other means of communications; seize any property or possession; taking control over transportation; making arrests and prosecutions of anyone deemed as offenders.

At an Aug. 27 press conference, when a reporter asked whether she would consider using this ordinance, Lam gave a vague response, saying that “All laws in Hong Kong, if they can provide a legal means to stop the violence and chaos, the government has a responsibility to look into it.”

Since then, fears have been mounting that Lam might evoke the city’s emergency law.

Local critics cited concerns that by declaring a state of emergency, the government would effectively have the authority to do whatever it wants.

The uncertainty of the situation has alarmed the Hong Kong society.

The Hong Kong Internet Service Providers Association on Aug. 29. issued an urgent statement highlighting the importance of an open internet. It said that the association was worried that the government may impose internet restrictions upon evoking the executive order.

Speaking on Commercial Radio Hong Kong following Lam’s press conference, Felix Chung Kwok-pan, leader of the Liberal Party in Hong Kong, said that extreme measures such as using the emergency law would not resolve the situation. He warned that the potential impact of Lam’s use of emergency powers could be more serious than the sometimes-violent clashes between police and protesters. Chung predicted that such a decision could lead to “an evacuation of foreign nationals and the withdrawal of foreign investment.”