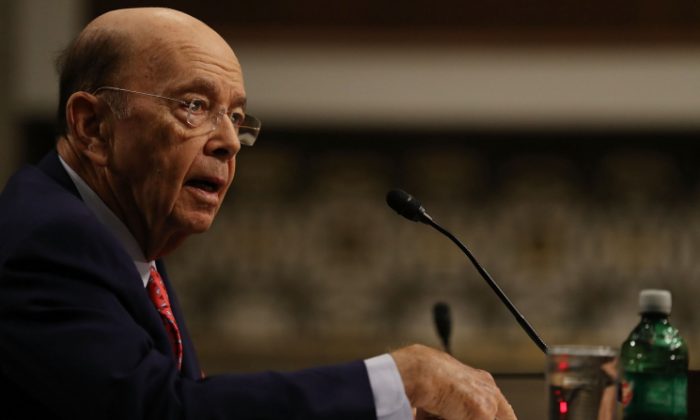 Wilbur Ross, picked by President-elect Donald Trump to serve as his commerce secretary, testifies at his confirmation hearing in front of the Senate Commerce Committee on Capitol Hill in Washington, DC on Jan. 18, 2017. (Joe Raedle/Getty Images)
Trump Administration

U.S. Commerce Secretary Wilbur Ross made the case for President Donald Trump’s proposed aluminum and steel tariffs by using two common food products to demonstrate the limited impact the trade measures would have on the cost of consumer goods.

Trump is expected to announce next week that the U.S. will impose a 25 percent tariff of steel and a 10 percent tariff on aluminum entering the United States.  In an interview with CNBC Ross addressed some of the critics of the tariffs by showing the minute impact they would have, as an example, on the price of a can of Campbell’s Soup and a can of Coca-Cola.

“Who in the world would be bothered by six-tenths of a cent?” Wilbur asked.

Ross then held up a can of Coca-Cola, saying that the can contains three cents of aluminum. With a 10 percent tariff, the price of the can would go up 0.3 cents.

“I just paid a $1.49 for this Coke. It doesn’t mean anything. So all this hysteria has a lot to do about nothing,” Ross said.

Ross also explained how the tariffs could impact the price of a car.

The commerce secretary also defended the idea of imposing a broad tariff on all nations,  saying that it is possible to circumvent a limited tariff by shipping through another country.

“The reason that we’ve had to go this route is that the conventional trade methods can’t solve the problem of systemic global over-capacity and global dumping,” Ross said. “It has to be broad, it has to be global in its reach to solve the fundamental problem.”

Trump campaigned on a promise to bring jobs back to the United States and put American interests first when it comes to international trade.