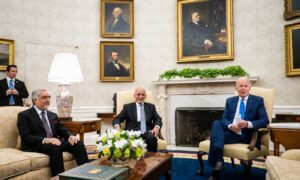 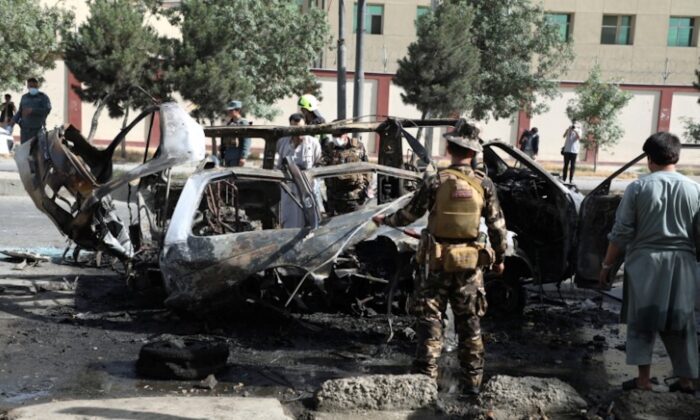 Afghan security forces inspect the wreckage of a passenger van after a blast in Kabul, Afghanistan on June 12, 2021. (Stringer via Reuters)
US News

US Commander in Afghanistan Warns of Deteriorating Security Situation: ‘It’s Not Good’

Gen. Scott Miller, the military commander directing the withdrawal of U.S. forces from Afghanistan, told ABC in an interview that the security situation in the country has deteriorated as the Taliban talks peace and, at the same time, engages in offensive operations across the country.

“I think what you’re seeing, just if you look at the security situation, it’s not good,” Miller told ABC’s Martha Raddatz in Kabul, in an interview published Monday. “The Afghans have recognized it’s not good. The Taliban are on the move.”

Miller said that, even as the Taliban are in talks with the Afghan government about a political settlement to the decades-long conflict, “you have an offensive operation going on across the country by the Taliban.”

He said the Afghan government understands the severity of the problem and is now moving to consolidate security forces to maintain the ability to resist the Taliban at key junctures rather than trying to defend isolated pockets of territory.

At the same time, as the Taliban have seized control of more districts in recent weeks, there is growing concern among Afghans in major population centers about a military takeover and the potential for civil war.

“As you watch the Taliban moving across the country, what you don’t want to have happen is that the people lose hope, and they believe they now have a foregone conclusion presented to them,” Miller told the outlet. “The loss of terrain and the rapidity of that loss of terrain has to be a concerning one.”

He warned that, at some point, there may be a fight for control of the capital, Kabul.

“You’re starting to create conditions here that doesn’t—won’t look good for Afghanistan in the future if there is a push for a military takeover,” he told the outlet.

Miller said that, as the U.S. troop pullout continues, he is increasingly having to deny requests for military assistance from the Afghan government.

Meanwhile, in a Monday interview with Washington Post Live, retired Army Gen. David Petraeus, who once commanded U.S. and NATO forces in Afghanistan, was even more explicit about the potential for civil war.

“I feared that we were consigning Afghanistan to a civil war, and again, that seems to be materializing sooner than I had even feared it would,” Petraeus told the outlet.

“You have seen the Taliban take dozens of districts in recent weeks. It appears that that kind of psychological element that is so important with soldiers, that they know that someone is coming to the rescue and that there will be close air support, air medevac, additional forces,” he said.

“They seem to be doubting that, and whenever that happens, then you start to see soldiers not fight, desert, surrender, what have you, and we’ve seen that in dozens of districts,” he added.

There have been multiple reports of Afghan forces surrendering to the Taliban since the U.S. troop pullout began in May.