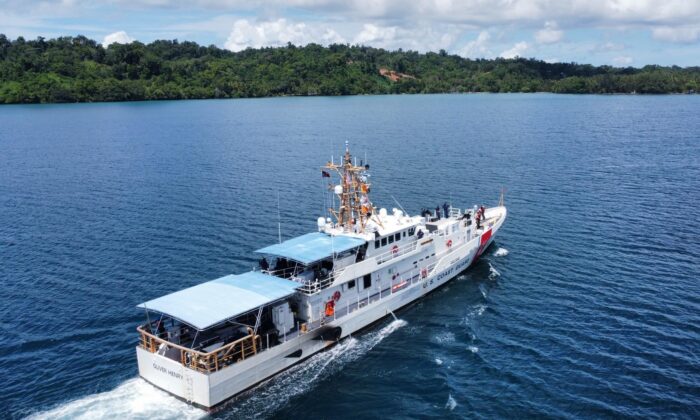 U.S. Coast Guard (USCG) vessel the Oliver Henry was greeted with silence when it requested permission for a scheduled port call in the Solomon Islands, forcing the crew to Papua New Guinea instead.

The incident comes amid mounting concerns about the influence of the Chinese Communist Party in the region and the ongoing weakening of democratic institutions in the Solomon Islands with the Pacific nation’s leader relying heavily on Chinese support to weather domestic turmoil.

The USCG cutter Oliver Henry was participating in Operation Island Chief, along with Australian, New Zealand, and UK vessels, to monitor and prevent illegal fishing activities in the South Pacific. The operation ended on Aug. 26.

The U.S. Coast Guard vessel had tried to make a scheduled stop at Guadalcanal, the Solomon Islands, for refueling and reprovisioning, according to a statement obtained by The Associated Press.

The radio silence from Solomons authorities follows a series of incidents suggesting the government of Prime Minister Manasseh Sogavare is not only deepening ties with Beijing, but also steadily eroding the country’s democratic institutions to strengthen his position.

The Sogavare government signed off on a major deal with Chinese telecommunications firm Huawei on Aug. 18 to build 161 mobile towers in the country with a 448.9 million yuan (US$66.15 million) loan from the state-owned Export-Import Bank of China.

These actions come after Sogavare signed off on a security pact with Beijing to allow the CCP to station weapons, troops, and naval ships in the country. This would give Beijing a military presence close to Australia, New Zealand, and the U.S. territory of Guam.

U.S. Sen. Marsha Blackburn (R-Tenn.) has recently met with Sogavare and other leaders in the region, calling for a “stand against the Chinese Communist Party.”

“The Indo-Pacific region is the next frontier for the New Axis of Evil,” Blackburn said in a statement. “Meeting with leaders from Fiji, the Solomon Islands, and Papua New Guinea was an important step in showcasing America’s commitment to the region and expanding our strategic relationships.”