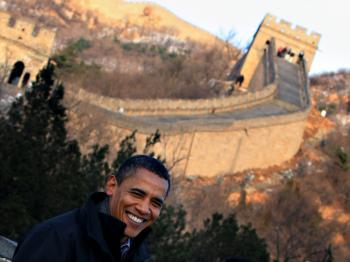 President Barack Obama tours the Great Wall on November 18, 2009 in Beijing. Obama is on an official visit to China, where he discusses the economy, trade and climate change. (Photo by Feng Li/Getty Images)
Business & Economy

Heide B. Malhotra
View profile
Follow
biggersmaller
Print
WASHINGTON—While the global economy recovers from the biggest recession in 50 years, economic growth and stability could be jeopardized by an increased tension between the United States and China, according to the Eurasia Group, a leading global political risk research and consulting firm.

Eurasia predicts that in 2010, a rift could occur between developed and developing nations, with issues arising from economies that are still overly dependent upon governmental stimulus and support.

But “the biggest risk for 2010 comes from the point at which these three trends converge: U.S.-China relations,” predicts a January report from Eurasia.

Another study jointly conducted by Eurasia and PricewaterhouseCoopers (PwC) revealed that nation-specific agendas—especially by the United States and China—could have consequences on the global economy as a whole.

“With the world’s principal actors under less immediate strain, there’s less pressure to keep up appearances. This year, the gloves start coming off,” states the Eurasia report.

The United States and China connection is at a “crossroads” and the “relationship will have a bumpy ride in the next decade,” said the Nautilus Institute, a public policy think tank, in its report that provides predictions spanning from 2001 to 2010.

Despite many dissimilarities and matters of disagreement, there was a possibility that the United States, the world’s largest borrower, and China, the world’s largest lender, would have a go at what was mockingly called the G2 by the media and a number of economic and political experts.

“In the future, we’ll look back at that summit [the China-U.S. meeting in November 2009] as the peak of the relationship, and we’ll see significant deterioration in US-Chinese relations in the coming year,” according to the Eurasia report.

Instead of becoming a viable global economic and political player, China has become adept at playing the monetary policy game. The Chinese Communist government continues to manipulate its currency, and in turn, the global export-import market.

China, through its forced labor camps and exploitation of its labor force, reduces product prices artificially, with which the rest of the world cannot hope to compete. Nations have accused it of dumping products—including steel, tires, and textiles—at less than what it costs to manufacture products abroad, driving competitors from the market.

As a result, protectionist demands and dumping charges against China are on the rise.

“China’s plans for its immediate economic future are fundamentally incompatible with the vision of ‘global rebalancing’ as laid out by Larry Summers and other Obama administration officials. This is the crux of the tension in the U.S.-China relationship—by way of protectionist policies and slower consumer spending, the United States is rejecting China’s development model,” said the Eurasia report.

U.S. distrust of Chinese intentions, reinforced by China’s restrictive protectionist actions against foreign investments and sale of foreign products while bulldozing into worldwide markets, is mounting.

Eurasia and PwC are not the only research firms that foresee deteriorating economic relations between the United States and China. “Mutual mistrust will continue to impede the development of U.S.-China relations in 2010,” according to a report from the EastWest Institute.

By November 2009, the most recent U.S.-Chinese monthly trade deficit reached $22 billion. U.S. companies are getting more vocal about sanctions against China. The United States slapped a tariff on tires and steel pipes in 2009. In a tit-for-tat, China retaliated and put a tariff on U.S. automotive products and chicken meat, not because of dumping by U.S. firms, but to show its anger about not being allowed to dump tires into the American market. Americans, especially labor unions, are demanding a tough policy from the Obama administration.

More than half of Americans recently interviewed by the Pew Research Center, a nonpartisan think tank, view the relationship with China to be on the rocks and troublesome and see the Chinese regime as a menace to the economic health of the United States.

Taiwan’s freedom has been a constant point of contention between China and the United States, with the Eisenhower administration threatening a nuclear attack on China in 1954. China’s annexation of Tibet and subsequent human rights abuses did not help the relationship since 1959.

The Tiananmen Square massacre froze the relationship between the two countries in 1989, with the United States suspending military sales to the regime. In 1996, China recalled its ambassador, protesting the United States granting a visa to Lee Teng-hui, the Taiwanese president. The 1999 accidental bombing of the Chinese Embassy in Belgrade by the North Atlantic Treaty Organization further cooled U.S.-China relations. Also in 1999, China began its persecution of practitioners of Falun Gong.

During the past years, China’s currency manipulations, trade distortion tactics, unwillingness to abide by World Trade Organization rules, dumping of products, Internet blockade, and cyber attacks of U.S. government facilities and private firms have also kept the China-U.S. relationship on an uneven keel.