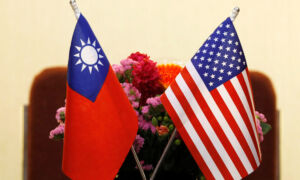 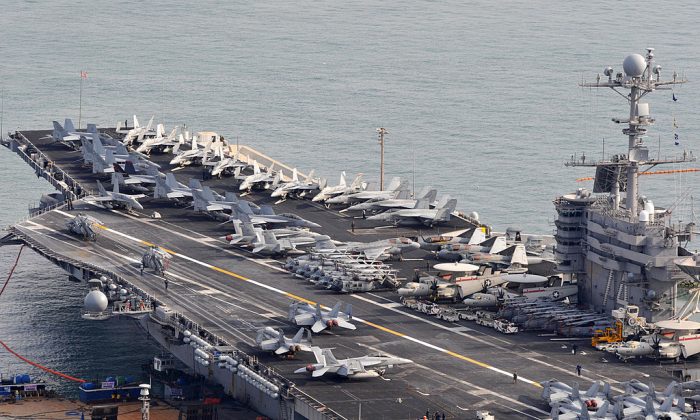 The USS John C. Stennis from the U.S. Navy's Seventh Fleet is anchored at a base in Busan on March 11, 2009. (Kim Jae-Hwan/AFP/Getty Images)
China

US Carrier Was Refused Port in Hong Kong as Punishment, Chinese Media Says

The refusal to grant aircraft carrier USS John C. Stennis the right to stop over in a Hong Kong port recently was done to “punish” the United States, according to Chinese state-run media.

Chinese officials, who are likely behind the April 28 decision to refuse the carrier a berth in Hong Kong, have not given any official explanation for the act. Parsing the statements in state-affiliated media is often the only way to fill in the gap.

On April 30, Xinhua, the official mouthpiece of the Chinese regime, ran a story with the headline: “The U.S. Military Shouldn’t Be Surprised That Stennis’ Hong Kong Visit Was Rejected.” It called on the United States to reflect on what it had done wrong that would justify “refusing to welcome a guest with courtesy.”

It also hinted at the reason directly, in the typically didactic style of Xinhua copy: “Why don’t we first look at what Stennis has done recently,” Xinhua intoned, listing a series of joint military exercises with South Korea and Philippines. “It was a small punishment to the U.S. military for being a provocative ‘vanguard,'” the article said, citing unidentified military sources.

Global Times, another state-run publication that often takes a more radical nationalistic stance, ran the Xinhua article twice. One of the headlines called on the U.S. to “reflect on the reason yourself.”

Though the U.S. Navy has often been able to port in Hong Kong without difficulty, the current incident is not the first rejection. In 2007, China refused two U.S. requests to dock after the United States sold arms to Taiwan.

The same carrier group, in fact, began stirring up controversy as soon as it entered the region. Before its abortive Hong Kong docking, the flotilla was conducting freedom of navigation operations in the South China Sea.

This large region of ocean is the site of many of China’s contentious claims to land features, upon which it is constructing military and other bases.

In response to these activities—fully protected by international law—China’s state media took the opportunity to play up anti-U.S. sentiment.

A provocative blog post, possibly written by a civilian with no particular credentials, was republished on china.com, a mouthpiece of China’s State Council on March 7. This article said that if the U.S. carrier became the aggressor, it would “die without a site for burial” after being targeted by China’s Army Rocket Force, which controls the People’s Liberation Army’s tactical and strategic missiles.

The same article compared the carrier group to a “snobbish teacher” who would never be willing to teach China. The piece added, sarcastically, that China still “welcomed” the trip, because it offered a chance to learn about its tactical movements and responses.

For example, China might be tempted to send a few fighter jets toward the carrier group and test how it responds, stated the article. The response, including electronic communication signals gathered by China’s reconnaissance ships, could provide valuable materials for study by the Chinese military.

Thus, its presence was akin to “a coach providing free lessons for China,” the article said.

For all that, it still wasn’t given a port.