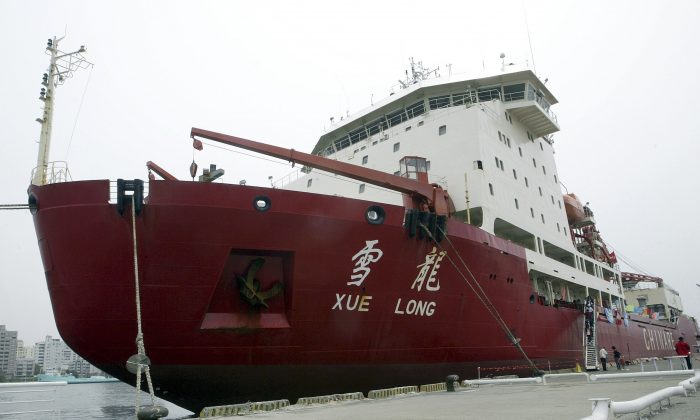 China's Xue Long research icebreaker is seen on April 2, 2009, in Kaohsiung, southern Taiwan. The ship is currently trapped in ice in Antarctica, and will be rescued by the U.S. Coast Guard Polar Star. (AP Photo)
China

US Called to Rescue Chinese Ship Trapped in Antarctic

China’s Xue Long, or “Ice Dragon,” research icebreaker is stuck in Antarctic ice, after attempting to rescue the crew of a Russian ship. In an ironic turn of events, the United States is now sending a ship to the rescue.

The U.S. rescue of the Chinese research ship, deemed the “most famous ship in China” by Jean De Pomereu of the International Polar Foundation, is a blow to the image of naval power that Chinese authorities have been trumpeting, and raises the question of whether China’s capabilities match its ambitions in the Arctic and Antarctic.

The Xue Long made a high-profile rescue of 52 passengers from the Russian MV Akademik Shokalskiy on Jan. 2, which was stuck in ice 1,700 miles south of Australia. Overnight, on Dec. 24, the Russian ship had been beset with ice.

The following day, the Australian Maritime Safety Authority received a message from the Chinese ship: “Xue Long notified AMSA at 1pm AEDT this afternoon it has concerns about their ability to move through heavy ice in the area,” states a press release from the Australian government.

The Xue Long is China’s sole icebreaker. The United States was called to the rescue Jan. 3 by Australian maritime authorities after one of its ships was identified as capable to carry out the mission.

The U.S. Coast Guard agreed, and will send the Polar Star, one of the largest ships in its fleet. It is capable of breaking ice up to 21 feet thick. It left port from Sydney on Jan. 5, and the mission to rescue the Chinese and Russian ships is expected to take seven days.

The ship was already deployed in the region, and had been on its way to Antarctica to clear a path in McMurdo Sound to the Australian National Science Foundation’s Scientific Research Station.

Control of Antarctica is regulated by the Antarctic Treaty, enacted in 1961, and currently with 50 signatory nations.

It stipulates that Antarctica be used only for peaceful purposes, and establishes standards for scientific projects.

Having no native people of its own, the continent is claimed by seven countries: Chile, Argentina, Britain, Norway, Australia, France, and New Zealand. Russia and the United States do not claim land, but reserve rights to do so.

China, being a latecomer to the dispute, also has its interests in the region—particularly when it comes to minerals. Mining in Antarctica is banned until 2048 under the Antarctic Treaty, but some analysts suspect that resource exploitation could start before then.

There are still land grabs taking place in Antarctica, but under the laws of the land, taking territory in the region takes the form of building scientific research bases.

When its icebreaker got stuck, China was in the process of building its fourth Antarctic base: the Taishan summer field camp. It was also scheduled to carry out inspections for another research station.

China is involved in a long list of territorial disputes, with those in the East China Sea and South China Sea being the most visible. However, disputes over polar territory are now becoming a larger focus.

Aside from its base-building in Antarctica, China also has its sights on the Arctic Ocean.

Its interests are outlined in a Feb. 2 report from the China Institute of International Studies, which is administered by the Chinese government. It cites the “rich resources and strategic value of the Arctic region…”

It is also suspected to be rich in minerals—including gold, copper, iron, platinum, and diamonds—and is valuable for commercial fishing.

China also cites its military interests, however. It refers to the Arctic as a “choke point” for Asia, Europe, and North America. It states, translated from Chinese, “Military experts believe that by dominating the Arctic, the military will be able to occupy the world’s ‘commanding heights.’”