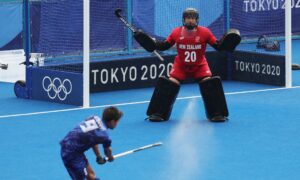 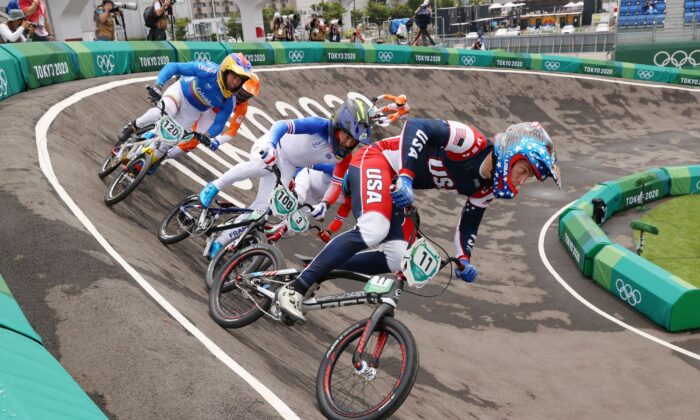 U.S. BMX racer and reigning Olympic gold medalist Connor Fields was carried off on a stretcher and loaded into an ambulance after a hard crash at the Tokyo Games on Friday.

The 28-year-old from Las Vegas was competing in the semifinals when he landed hard off a jump heading into the first turn in the third run. He slammed into a turn and was struck by two other riders, Twan van Gendt of the Netherlands and Sylvain Andre of France, before being attended to by medical personnel.

Fields lay on the track for several minutes before he was loaded into an ambulance.

“We can confirm that Connor Fields is awake and awaiting further medical evaluation,” a Team USA doctor said in a statement. “We will share additional updates as they become available.”

Fields previously competed in two most recent Olympics games, and made history when he won gold at the 2016 Rio Games. He was a favourite to win gold again in Tokyo.

Based on his first two heats, Fields had qualified for the finals, but wasn’t able to compete in the BMX finals. The race was won by Nike Kimmann from the Netherlands.

“I haven’t seen the crash, but I hope he’s OK,” Kimmann said. “He’s been a great ambassador for the sport. For me, it’s sad he wasn’t able to defend his gold medal.”

According to Sports Illustrated, Fields’ father, Mike, said his son was “alert, answering questions and moving all his limbs.” He added that his son was in pain, “quite subdued” and was undergoing CT scans on his head, spine and abdomen.

“There’s always a yin and yang to the world and how it works,” he said, the outlet reported. “We enjoy the highs of the success and all that comes with it but the other side of the coin is exactly what we’re dealing with now, which (are) the risks and consequences if things go badly.”

Fields’ father reportedly described the crash as “one of those times we just have to trust in the universe.”