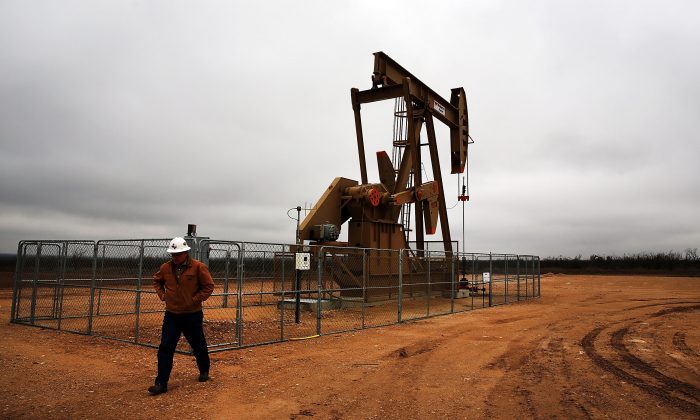 The United States has hit another milestone in the Trump administration’s quest for energy independence, becoming a net exporter of crude and petroleum products for a full month for the first time in 70 years, according to government data.

U.S. monthly oil exports surpassed imports by 89,000 barrels per day in September, making the country a net exporter on a monthly basis for the first time since the government started tracking relevant data in 1949, according to figures published by the Energy Information Administration (EIA).

About a decade ago, the U.S. ran a negative oil trade balance of more than 13 million barrels per day.

The new figures confirm the trend forecast in the Short-Term Energy Outlook published by the EIA earlier this month.

“Based on preliminary data and model estimates, EIA estimates that the United States exported 140,000 b/d more total crude oil and petroleum products in September than it imported,” the agency said on Nov. 13.

“If confirmed in survey-collected monthly data, it would be the first time the United States exported more petroleum than it imported since EIA records began in 1949.”

Last year, the United States became a net oil exporter for a given week for the first time in almost 75 years. In the final week of November 2018, weekly U.S. net imports of crude oil and petroleum products fell to minus 211,000 barrels per day, meaning the country became a net exporter of that amount, according to data from the EIA.

U.S. oil exports have expanded rapidly in recent years as a result of many factors, including increased domestic production of crude oil and hydrocarbon gas liquids.

In the past half-century, the Organization of the Petroleum Exporting Countries (OPEC), led by Saudi Arabia, had typically dictated oil markets. The rise of U.S. shale production, however, has changed that dynamic.

Economy That ‘Undergirds Our Entire Civilization’

As the United States becomes a net energy exporter, it gains the ability to contribute one of the foundational needs for economic prosperity in developing countries—reliable energy, Jason Isaac, senior manager at Life: Powered, told The Epoch Times.

He dismisses claims that increased fossil fuel production has led to greater environmental degradation in the United States.

“According to the EPA, that couldn’t be further from the truth. It’s getting cleaner. The United States actually leads the world in clean air,” he said.

Isaac said providing reliable, affordable energy to developing countries is an opportunity to lift millions of out poverty and save lives.

“They burn fuels such as wood or animal dung to heat and cool their homes,” he said. “Almost a million people a year die around the world from lung illness caused by indoor air pollution because they don’t have access to energy. So they use what they do have available and so that’s trees, animal dung, and things like that to eat and cook their food. We should want those people to get access to our energy and our energy resources and our technology that helps reduce pollution.”

“What I think the left gets wrong is I think they don’t have faith in American entrepreneurialism and in American technology,” he told The Epoch Times. “There is no doubt we used to be a dirtier country. Coal has gotten cleaner. Oil and gas has gotten cleaner. They don’t have the faith that as time goes by, these technologies get better, they get smarter.”

Turner says critics of U.S. fossil fuel-based energy production dismiss its benefits and disregard the people who rely on those jobs for their livelihoods.

“Instead, they just denigrate them,” he said, and “make them sound like they’re bad guys, but what they’re doing is providing this economy that undergirds our entire civilization.”

“Things are cheap. Gas is cheap,” Turner said. “Iran is seizing cargo ships in the Straits of Hormuz and oil is at $52 a barrel. That’s extraordinary. It should be at $150. It was 10 years ago when we were in these conflicts. Why is it not? Because America is energy independent. And your groceries are getting cheaper, your cars are getting cheaper. Look at the quality of life we have.”

“Things are good, things are cheap, things are inexpensive. And instead of celebrating any of that, they just look at it as bad, wrong, evil, destroy—socialism.”