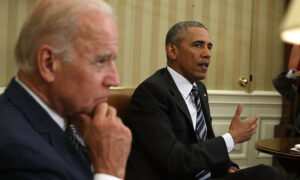 The U.S. attorney tasked with reviewing the litany of unmasking requests made by officials in the late stages of the Obama administration and the early days of the Trump administration announced his resignation on Monday.

John Bash, U.S. attorney for the Western District of Texas, said he accepted an offer for a position in the private sector last month and informed Attorney General William Barr.

Bash, 39, tendered a letter of resignation to both Barr and President Donald Trump on Oct. 5.

Bash thanked Trump, Sens. John Cornyn (R-Texas) and Ted Cruz (R-Texas), and the attorneys and other staff members who worked under him.

“Through their tireless efforts, we have held accountable child abusers, drug-cartel leaders, gang members, bank robbers, embezzlers, fraudsters, scammers, and corrupt public officials. The exceptional public servants of our office have continued to perform at a high level during the national health crisis,” he said in a statement.

“But there was nothing more soul-stirring than the way El Pasoans came together in the wake of that nightmare in a spirit of love and perseverance,” he added.

Barr said in a statement that he was grateful for Bash’s service.

Neither mentioned Barr directing Bash in May to review the unmasking requests.

At the time, Department of Justice spokeswoman Kerri Kupec said Bash would review episodes both before and after the 2016 presidential election.

The probe will “shed light and give us a better understanding of what happened with respect to President Trump, his campaign, and, of course, what happened after he was elected as well,” Kupec said.

Unmasking refers to revealing the identity of a U.S. citizen in intelligence reports.

The Department of Justice didn’t respond to an inquiry about the probe, including whether it is complete or, if not, whether it will continue under another U.S. attorney.

Unmasking data for the crucial time around the 2016 election was missing from transparency reports recently released by the Office of the Director of National Intelligence.

Bash, appointed to the U.S. attorney position by Trump in December 2017, is being replaced by Gregg Sofer, a veteran Department of Justice attorney.

Bash said Sofer was “an inspired choice” who “built a reputation as a dogged and tremendously effective prosecutor.”

Barr said Sofer “has served as an exceptional prosecutor for more than 29 years, devoting himself to the pursuit of justice and the protection of the citizens of this country.”

Sofer said in a statement that he was thrilled to serve the people of his home state as U.S. attorney.