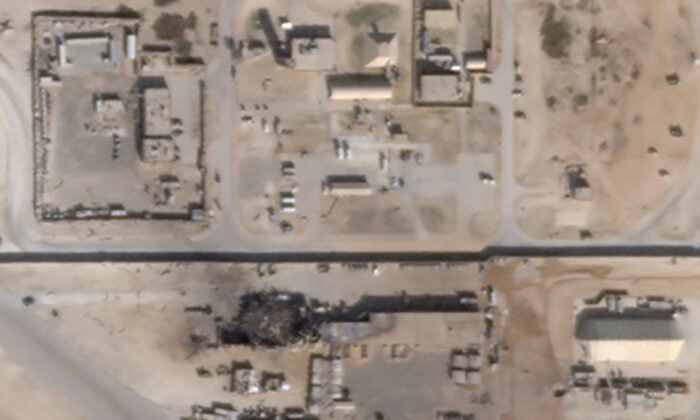 What appears to be new damage at Al Asad air base in Iraq is seen in a satellite picture taken on Jan. 8, 2020. (Planet/Handout via Reuters)
US News

Army Secretary Ryan McCarthy told reporters on Jan. 15 that the Pentagon is also mulling deploying other capabilities to protect American soldiers and bases from future strikes, according to Military.com.

Describing Iran as a “very capable enemy,” McCarthy warned that it has the capability to strike and hit Americans.

In retaliation for the earlier U.S. drone strike that killed the head of the Iranian armed forces, Iran on Jan. 7 launched 16 ballistic missiles at two bases housing American troops. There were no casualties in the attack.

The missile attack followed the drone strike on Jan. 3 of Qassem Soleimani, the head of the Islamic Revolutionary Guard Quds Force, which the United States has designated as a terrorist organization.

The Pentagon said Soleimani, who was responsible for the killing of hundreds of Americans over the years, was killed in self-defense.

Gen. Mark Milley, the chairman of the Joint Chief of Staffs, on Jan 6, rejected claims that the intelligence was “razor thin,” telling reporters, “I’ll stand by the intelligence I saw,” saying it “was compelling, it was imminent, and it was very, very clear in scale, scope.”

In addition to the strike on the Iraq missile base, Iran responded to Soleimani’s death by announcing it would no longer abide by the terms of the international deal aimed to curb its nuclear ambitions, known as the Joint Comprehensive Plan of Action (JCPOA). Iran has breached the terms of the deal a number of times over the years.

The UK, France, and Germany, three countries still involved in the deal, triggered a dispute mechanism in the JCPOA following Iran’s announcement said it was suspending all limits on its production of enriched uranium.

While Trump withdrew the United States from the pact in 2018, the UK, Germany, France, Russia, and China have so far stood by the deal.

Following the triggering of the dispute mechanism, Iranian President Hassan Rouhani on Jan. 15 threatened the safety of European forces in the Middle East, saying in a televised speech that they “could be in danger.”

Iran’s military ambitions rely on proxies, “hybrid warfare,” naval power, and missile defense, according to an unclassified Pentagon report, published in November, but are clipped by financial constraints and sanctions.

The report is a snapshot of how the Pentagon sees the 40-year-old Islamic regime’s current military strengths, strategies, and ambitions, following the publication of similar unclassified documents by the Defense Intelligence Agency (DIA) on Russia and China in the last couple of years.

“Iran employs a hybrid approach to warfare using both conventional and unconventional elements,” Christian Saunders, the DIA senior analyst on Iran, said in a statement.

“On the conventional side, Iran’s military strategy is primarily based on deterrence and the ability to retaliate against an attacker,” he added. “Iran also uses unconventional warfare operations and a network of militant partners and proxies.”

According to the DIA report, Iran relies on three core capabilities: ballistic missiles, naval forces capable of threatening navigation in the Persian Gulf and the Strait of Hormuz—one of the world’s most strategically important choke points through which more than a firth of the world’s oil passes—and unconventional capabilities including the use of partners and proxies abroad.