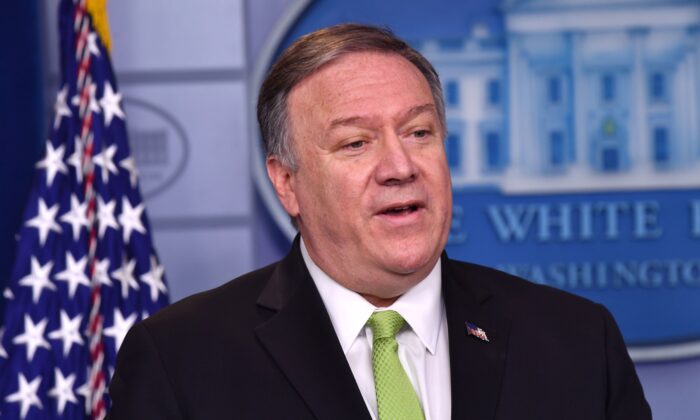 Secretary of State Mike Pompeo announces new sanctions on Iran, at the White House in Washington, on Jan. 10, 2020. (Nicholas Kamm/AFP via Getty Images)
US News

U.S. Secretary of State Mike Pompeo congratulated Taiwan President Tsai Ing-wen on her re-election on Jan. 11, commending her for maintaining stability with Beijing “in the face of unrelenting pressure.”

The elections demonstrated the strength of the island’s “robust democratic system,” which makes Taiwan “a model for the Indo-Pacific region and a force for good in the world,” Pompeo said in a statement.

“The United States thanks President Tsai for her leadership in developing a strong partnership with the United States and applauds her commitment to maintaining cross-Strait stability in the face of unrelenting pressure,” he added, in a likely reference to growing efforts by the Chinese regime to interfere with the self-ruled island. Beijing sees Taiwan as a part of its territory, despite the island having its own political and economic system.

Tsai of the Democratic Progressive Party (DPP) defeated her main opponent Han Kuo-yu of the Kuomingtang (KMT) party in a landslide victory, as around 74 percent of the voting population turned out to vote on Saturday.

Her win came despite increased efforts by the Chinese regime to influence the elections in favor of pro-Beijing candidates.

“[In Taiwan] you have among the most sophisticated and well-educated voters in the world, and ultimately that is a hard audience to fool.” James Moriarty, chairman of the American Institute in Taiwan (AIT), a de facto embassy in Taiwan, told NTD, an affiliate of The Epoch Times, of Beijing’s attempts to interfere with the island’s elections.

Several U.S. lawmakers also joined in to congratulate Tsai, including Sen. Tom Cotton (R-Ark.) who, in a statement, called the island’s democracy a “shining beacon of freedom for oppressed peoples around the world, particularly those suffering under the yoke of the Chinese Communist Party.”

Congratulations to President @iingwen and to the people of Taiwan for an extraordinary electoral victory. The United States Congress stands firmly with #Taiwan!

The U.S. Deputy Assistant Secretary of State Jonathan Fritz said at an election-watching event in Washington that Taiwan had “provided a stellar example of democracy in action.”

“We also share with the Taiwan people a profound interest in cross-strait peace and stability, and will continue to work to counter unilateral efforts that seek to alter the status quo,” Fritz added, in a reference to the Chinese regime.

The United States is bound under law to provide Taiwan with arms and services necessary to defend itself, and also maintain its own defense capacity to defend against threats to Taiwan.

Randall Schriver, who until December was the Pentagon’s top official for East Asia, said during the same event that the election should be an inspiration to other countries facing the similar pressures from Beijing.

“Taiwan was under extraordinary pressure and facing coercion,” he said. “Taiwan is not the only country in the Indo-Pacific that faces that. Other countries, as they prepare for their elections, will take great inspiration and heart for how Taiwan withstood that kind of pressure and carried forward with a very successful election.”

The island’s democratic elections will also prompt people in mainland China to question their own governance, Schriver said.

“The CCP is not a representative government entity, it is not a legitimate fully in the way that elected governments are,” he said, referring to the Chinese Communist Party.

“And every time Taiwan succeeds in its own election, people in China pay attention and ask themselves questions, why they can’t have those same privileges and rights? So someday there may be a different kind of China.

“And I’m sure that Taiwan’s example is going to be on the leading edge of what promotes that change.”