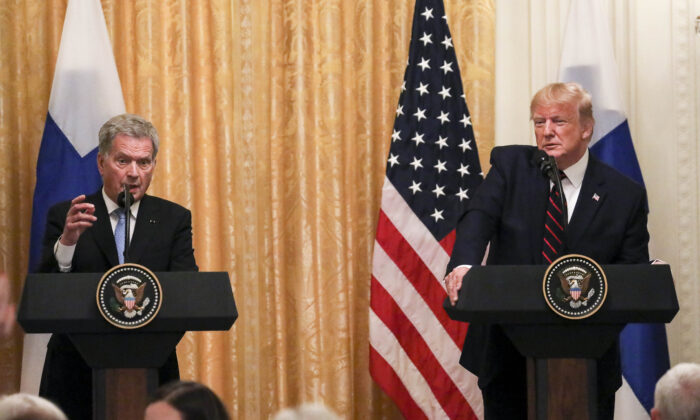 Finland President Sauli Niinistö and President Donald Trump at a joint press conference in the East Room of the White House in Washington on Oct. 2, 2019. (Charlotte Cuthbertson/The Epoch Times)
US News

US and Finland Boost Ties to Counter China, Russia in Arctic

WASHINGTON—The United States and Finland agreed to strengthen cooperation on defense and fifth-generation wireless technology (5G) in the face of growing Chinese and Russian challenges in the Arctic.

President Donald Trump hosted on Oct. 2 his Finnish counterpart Sauli Niinistö at the White House. Both leaders celebrated the 100th anniversary of diplomatic relations between the United States and Finland.

During a joint press conference, Trump took aim at China, without directly naming it, for its growing ambition and increasing presence in the Arctic region.

“Both of our nations are committed to a secure Arctic region free from external intrusion, interference, and coercion,” Trump said.

“Simply put, we believe the affairs of the Arctic should be governed by the actual nations of the Arctic. … there are other people coming into the Arctic and we don’t like it. And we can’t let it happen.”

In 2018, China declared itself a “near-Arctic” state and released a policy paper titled “China’s Arctic Policy.” The paper outlined Beijing’s ambitions in the polar region, which included developing shipping, carrying out scientific research, and exploiting oil, gas, and other natural resources.

To support its polar aspirations, China has stepped up its scientific efforts and deployed icebreaker vessels and research stations in Iceland and Norway, which has sparked concern among Arctic border countries.

The Pentagon in a report raised alarms about China’s ambitions in the region, warning that the communist state could establish a military toehold.

“Civilian research could support a strengthened Chinese military presence in the Arctic Ocean, which could include deploying submarines to the region as a deterrent against nuclear attacks,” the report stated.

A senior administration official told reporters on Oct. 1 that the United States was working closely with the countries in the region to preempt China’s debt-trap diplomacy.

“The president firmly believes that Arctic governance should be reserved for Arctic nations, particularly through the Arctic Council,” he said.

The United States and Finland are members of the Arctic Council, an intergovernmental forum that promotes cooperation among Arctic states.

The Arctic Council was established in 1996 and consists of representatives from all eight countries that have Arctic territories, including the United States, Canada, Russia, Finland, Norway, Denmark, Sweden, and Iceland.

The Trump administration has also raised concerns about Russia’s military buildup in the region.

“It’s pretty clear that the Arctic should be an area for commerce and not for Russian militarization,” the senior administration official said.

Speaking at the press conference, Niinistö acknowledged that there are “huge risks” in the Arctic.

“One of them is that we should keep the low tension we are used to having there. And that is what we have been discussing, and I do appreciate the president’s position to emphasize that. It is not a place for military,” Niinistö said.

In May, Secretary of State Mike Pompeo criticized Russia for behaving aggressively in the Arctic.

“In the Northern Sea Route, Moscow already illegally demands that other nations request permission to pass, requires Russian maritime pilots to be aboard foreign ships, and threatens to use military force to sink any that fail to comply,” Pompeo said. “These provocative actions are part of a pattern of aggressive Russian behavior in the Arctic.”

During their meeting, Trump and Niinistö also agreed to boost cooperation in 5G technology and find alternatives to offerings from China-based telecom equipment firms like Huawei.

Washington has been pressuring European allies to ban or restrict Huawei from their 5G networks, citing national security concerns and funding from Chinese state security. And this pressure has helped the Finnish telecom company Nokia, one of Huawei’s major rivals, to gain market share in Europe.

“The United States and Finland are likewise partnering to ensure the security of 5G networks,” Trump said. “It is critical that we use safe and trustworthy technology providers, components, and supply chains.”

The innovation center, he said, would “greatly expand American and Finnish businesses and cooperation in 5G.”

With respect to Huawei, Niinistö noted that the European Union was currently assessing the potential security risks of partnering with Huawei and that assessment would be completed in two weeks.

“After that, we have to decide together, in the European Union, what kind of tools we need to protect ourselves,” he said.