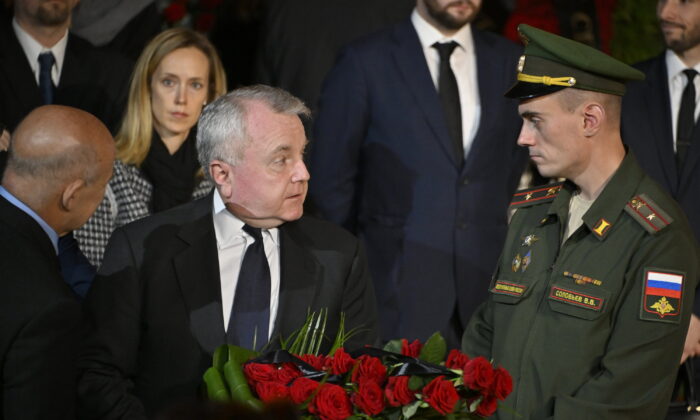 U.S. ambassador to Russia John Joseph Sullivan (C) walks to the coffin of former Soviet leader Mikhail Gorbachev inside the Pillar Hall of the House of the Unions during a farewell ceremony in Moscow on Sept. 3, 2022. (Alexander Nemenov/Pool Photo via AP)
Russia-Ukraine War

The U.S. ambassador to Russia departed his post on Sunday and will retire, the U.S. Embassy announced.

“U.S. Ambassador to the Russian Federation John J. Sullivan has concluded his tenure as U.S. envoy and departed Moscow today,” the U.S. Embassy in Russia said in a statement Sunday.

“Ambassador Sullivan was appointed in December 2019 and has served as Ambassador for almost three years,” the statement reads. “Following his departure, he will retire from a career in public service that has spanned four decades and five U.S. presidents, including service as the Deputy Secretary of State and in senior positions at the Departments of Justice, Defense, and Commerce.”

Other details about his departure have not been revealed, though the move comes amid the worst relations between the United States and Russia in decades.

Elizabeth Rood will take over as the embassy’s chargé d’affaires until a successor is named, the statement said.

Sullivan oversaw the embassy when Russia sent troops and forces into Ukraine on Feb. 24 and has served as the main point of contact between the Kremlin and the United States.

Several months ago, he conceded that Moscow-Washington relations have hit an all-time low in the midst of the Ukraine conflict.

The departure comes as U.S.-Russian relations remain tense. Since Russia invaded Ukraine in February, the war has slowed to a grind with both sides trading combat strikes and small advances in the east and south.

Both Russia and Ukraine have seen thousands of their troops killed and injured since the start of the conflict. Meanwhile, the United States and European Union have hit Moscow with harsh sanctions and, in some cases, have stopped purchasing Russian gas and oil.

The last remaining main external power line was cut off while a reserve line continued supplying electricity to the grid, the International Atomic Energy Agency (IAEA) said in a statement. Only one of its six reactors remained in operation, it said.

Each side has blamed the other for shelling in the vicinity that has raised fears that a nuclear disaster could be triggered.

An official from the Russian-installed administration in Zaporizhzhia said the situation around the plant had been calm so far on Sunday.