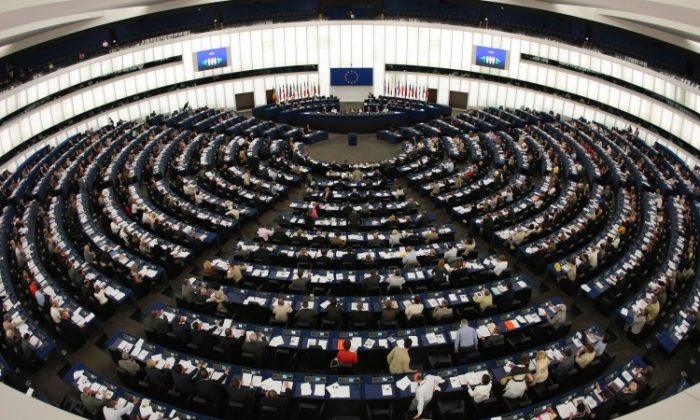 View of the hemicycle of the European Parliament in Strasbourg on July 8, 2008, during the vote session about a law requiring airlines to cap their emissions of CO2 from 2012 and to pay for a portion of the pollution generated. (Johanna Leguerre/AFP/Getty Images)
US

A legal challenge by US airlines to an EU law that limits global warming pollution by airlines, was due to be heard at the high court in London on Thursday, March 29. But the airlines withdrew their case at the last minute on Tuesday, March 27, without giving any explanation.

After two years of fighting the EU directive, the airlines United, American Airlines, and their trade association, Airlines for America, realised that their legal challenge was doomed to failure.

It is believed their legal representatives had advised the airlines that any further challenge would be unlikely to succeed as a result of the European Court of Justice ruling last year. It ruled that the EU directive was consistent with international law.

After the ruling went against them in December, the airlines decided to pursue their case with fresh claims at the UK High Court up until their dramatic last-minute withdrawal.

A joint statement by WWF-UK, Aviation Environment Federation, Centre for Biological Diversity, Earthjustice, Environmental Defense Fund, and Transport & Environment, commented that it was disappointing that US airlines are refusing to accept the ECJ ruling, and may simply be moving the battlefield elsewhere.

From January 2012 the new law requires that all airlines taking off and landing in countries in the EU will be subject to the new aviation directive. Airlines will be held accountable for harmful emissions that effect global warming.

The EU has said that it would modify the directive if governments and airlines around the world could agree on a joint policy to limit global warming pollution from aviation. An agreement to reduce climate pollution from aviation would be administered through the International Civil Aviation Organisation (ICAO).

According to the statement, ICAO Secretary General Raymond Benjamin has made a proposal to agree, by the end of the year, global measures to reduce aviation emissions.

The impact around the world from aircraft emissions has become a serious concern. Global aviation emissions were up by 11 per cent in five years despite the recession, according to the Aviation Environment Federation.