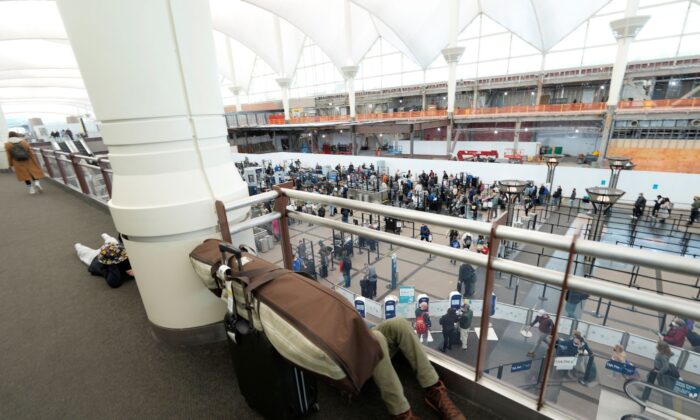 A passenger sleeps amid baggage above the north security checkpoint in the main terminal of Denver International Airport in Denver, on Jan. 3, 2022. (David Zalubowski/AP Photo)
Businesses in COVID-19

A winter storm that hit the mid-Atlantic on Monday combined with pandemic-caused shortages of airline workers pushed flight cancellations to a holiday-season high.

More than 3,000 U.S. flights and about 4,800 worldwide were canceled by late afternoon Monday on the East Coast, according to tracking service FlightAware. Another 13,000 flights were delayed, including more than 6,000 in the United Staes.

Over the New Year’s Day weekend, about 5,400 U.S. flights were canceled—nearly 12 percent of all scheduled flights—and more than 9,000 worldwide, according to FlightAware. By Monday afternoon, about 18,000 U.S. flights had been canceled since Christmas Eve.

The delays came during one of the biggest travel periods of the season, with travel numbers approaching pre-pandemic levels.

Southwest Airlines had canceled about 600 flights, or 17 percent of Monday’s schedule, by midday.

SkyWest, a regional carrier that operates flights under the names United Express, American Eagle, and Delta Connection, grounded more than 350 flights Monday after scrubbing 500 on Sunday.

Investors have largely shrugged off the holiday disruptions, even as the crisis continues into the new week.

“Omicron could have a modest, short-term impact on the space from airline employees being forced to go through a 5-day quarantine when they get infected, and some impact on demand,” said Stephen Trent,  Citigroup’s airline analyst in an interview with CNBC.

“Nevertheless, higher vaccination rates and emerging anti-viral treatments are just some of the factors that could make negative, knee-jerk stock price reactions to the emergence of future variants look increasingly unreasonable,” said Trent.

The U.S. holiday travel season, which includes Christmas and New Year, is typically a peak time for air travel and the most profitable for the industry, but the rapid spread of Omicron has forced airlines to cancel flights as increasing numbers of pilots, cabin crews, and support staffers quarantine.

U.S. airlines have been struggling to get their employees to work overtime during the holidays, despite offers of hefty financial incentives after furloughing or laying off thousands over the last 18 months due to vaccine mandates and the pandemic.

Transportation agencies across the United States are also suspending or reducing services due to Omicron-related staff shortages.

However, 1,650,795 passengers were screened on New Year’s Eve, more than double the 805,990 passengers screened the prior year.

The rise in CCP (Chinese Communist Party) virus cases in the United States is leading some companies to decrease the number of employees working from their offices in January.