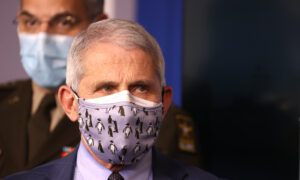 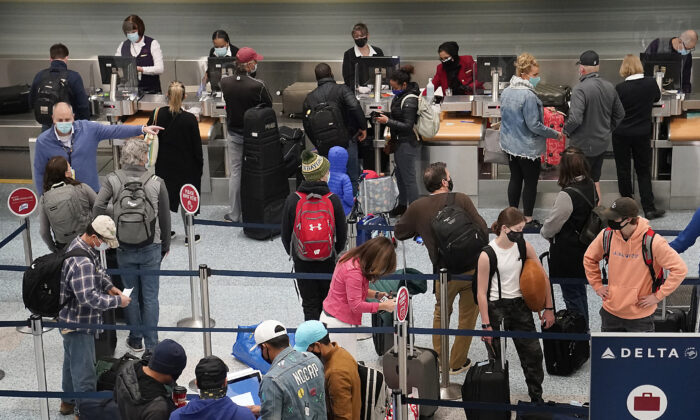 Holiday travelers crowd the ticketing area of terminal one at Minneapolis−Saint Paul International Airport in Minneapolis, Minn., on Nov. 25, 2020. (David Joles/Star Tribune via AP)
US News

Air travel in America set a new record since people dramatically cut down on flights due to the COVID-19 pandemic, breaking one million flights on Wednesday.

The Centers for Disease Control and Prevention on Nov. 19 recommended people not travel for Thanksgiving, citing the pandemic.

“The tragedy that could happen is that one of your family members is coming to this family gathering and they could end up severely ill, hospitalized, or dying. And we don’t want that to happen. These times are tough, it’s been a long outbreak, almost 11 months, and we understand people are tired,” Dr. Henry Walke, an official at the agency, said during a call with reporters.

“We understand that people want to see their family and relatives and do it as they’ve always done it. But this year we’re asking them to limit their travel.”

Since then, 6.5 million people traveled through TSA checkpoints, including nearly 570,000 on Thanksgiving day. That was compared to nearly 1.6 million people who traveled by air on the holiday last year.

“Thanksgiving isn’t typically a busy day at airports, but as you can see, yesterday was still significantly lower than in 2019,” TSA spokesperson Lisa Farbstein said in a statement.

Airports have implemented protocols including increased cleaning and require travelers to wear masks in terminals and on planes.

Travel dipped at New England’s six major airports from about 26,000 last year to 11,516 this year, a TSA spokesperson said.

The TSA has continued screenings throughout the pandemic. Eleven TSA employees have died due to COVID-19, according to the agency.

COVID-19 is the disease caused by the CCP (Chinese Communist Party) virus. Symptoms include aches, fever, and loss of taste and smell. Most patients show no or few symptoms and the vast majority recover.

While millions of Americans flew for Thanksgiving, tens of millions traveled by car, according to forecasts from the American Automobile Association (AAA).

AAA estimated up to 50 million Americans would travel for the holiday, 95 percent of whom would use vehicles to travel.

“The decision to travel is a personal one. For those who are considering making a trip, the majority will go by car, which provides the flexibility to modify holiday travel plans up until the day of departure,” Paula Twidale, senior president of AAA Travel, said in a blog post.

Americans traveling in major urban areas should expect to see bottlenecks, up to 30 percent above normal congestion levels, on and around Thanksgiving. Delays were estimated to be up to 69 minutes on the busiest corridors, such as I5 South—Colorado Street to I-5/605 in Los Angeles.