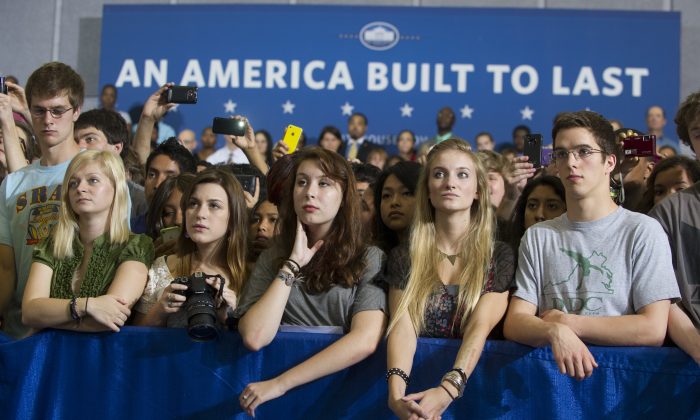 Junior and senior high school students listen as US President Barack Obama speaks on the interest rates of federal subsidized student loans at Washington-Lee High School in Arlington, Virginia, May 4, 2012. (Saul Loeb/AFP/GettyImages)
US

The findings were released Monday from an annual study by the nonprofit Institute of International Education and the U.S. Department of State.

Of almost 1 million students that came to the U.S. in the 2014-15 school year, about a third came from China, the most from any country. But much of last year’s growth is credited to a surge in the number of students who came from India, drawn by strong research programs, experts say.

In all, the number of Indian students in the U.S. grew by 30 percent to more than 130,000, the biggest jump since the nonprofit started collecting data in 1954.

“That increase has been primarily at the graduate level, and we know that Indian students have always been very attracted to the availability of excellent science and research facilities on U.S. campuses,” said Rajika Bhandari, the nonprofit’s deputy vice president for research and evaluation.

Numbers coming from Brazil spiked, too, from 13,000 to 23,000, but Brazilians still made up only 2 percent of international students in the U.S.

Related Coverage
US Student Loan Problem and How We Got Here

How US Should Rein in College Tuition, Curb Student Debt

The U.S. remains the top destination for international students, but relatively few Americans study abroad. About 300,000 U.S. students left the country to study in the 2013-14 school year, the most recent year for which figures for Americans are available, a number that has risen steadily but still accounts for less than 2 percent of all U.S. undergraduate students.

To boost those numbers, the U.S. Department of State said it’s opening a new study abroad office offering information on programs and scholarships.

“We are going to be working very actively on outreach to explain the benefits of study abroad and encourage more Americans to participate,” said Marianne Craven, the acting deputy assistant secretary of state for academic programs. The office plans to launch its website this week, Craven said.

Top destinations for U.S. students are the United Kingdom, Italy and Spain. European countries drew half of all U.S. students who studied abroad.

Colleges, too, have been pushing students to study abroad for years, citing the benefits of cultural exchange. Dozens have signed on to a national campaign encouraging all students to get passports. Universities have also ramped up efforts to recruit international students, especially in growing regions.

“They know that attracting international students to their campuses makes for a better student body,” Craven said.