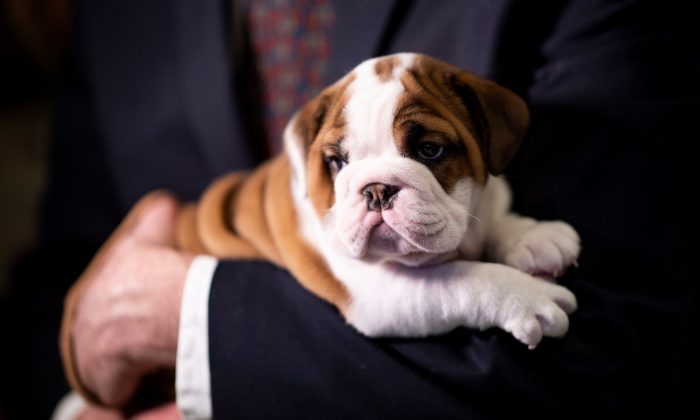 English bulldog Annie looks on at the American Kennel Club's Museum of the Dog during the announcement of the most popular breed, in New York on March 20, 2019. (Johannes Eisele/AFP/Getty Images)
UK

Vets are calling for urgent change to English bulldog breeding, as a new study suggests that the dog’s signature traits are causing the breed to be significantly less healthy than other breeds.

“These findings suggest that the overall health of the English Bulldog is much lower than that of other dogs,” said study author Dan O’Neill in a media release.

The biggest concern for O’Neil is that many of the health problems English bulldogs, which are also known as British bulldogs, suffer from “are directly linked to the extreme structure of their bodies that has been selectively bred for.”

English bulldogs have a shorter face with protruding lower jaw, heavier build, bowed legs, and the breed’s facial folds as a feature of appeal.

However, the dog’s folded skin also gives the breed 38 times greater risk of developing infections in the folds.

The shorter snouts predispose the dog to 24 times greater risk of jaw overbite and greater risks of breathing problems that can lead to heart and gastrointestinal problems. All of these problems contribute to the breed’s ill health and short lifespans.

Historically, English bulldogs were muscular and athletic dogs bred to attack bulls for sport. After this activity was banned in 1835, the aggressiveness of the breed was gradually bred out and the breed became show dogs instead.

Since 1873, the Kennel Club, an organization for show dogs, wrote new “breed standards” to describe the idealized and preferred appearance of the breed, with more exaggerated features than its canine ancestors.

In particular it had a shorter face with a protruding lower jaw, heavier build, and bowed forelegs, all of which reduced its capability for exercise, gave the dogs a calmer temperament, and a greater predisposition to various health defects including difficult birth.

Compared to other dog breeds, English bulldogs have double the risk of developing at least one disorder and typically have a shorter lifespan than other breeds.

In the study, the authors compared all available dogs under primary veterinary care at clinics in the United Kingdom under the VetCompass Programme in 2016.

However, though it is widely known that bulldogs often have poor health due to selectively breeding for their feature characteristics, the authors were concerned to find the breed still boasts wide popularity.

According to the American Kennel Club, English bulldogs ranked fourth in popularity in 2020, with over 90 percent of English bulldog owners reporting that they will re-purchase the breed again, unintentionally adding to the problem of producing more bulldogs with impaired health.

“Given the continued popularity of the breed, the body-shape of the typical pet English Bulldogs should be redefined towards more moderate physical characteristics,” O’Neill said.

“Doing so will not only improve the dogs’ health, but could also enable the UK to avoid following other countries in banning the English Bulldog on welfare grounds.”

In February 2022, Norway banned the breeding of English bulldogs owing to animal welfare concerns, with a court ruling that breeding pups with shorter snouts only results in unhealthy dogs.