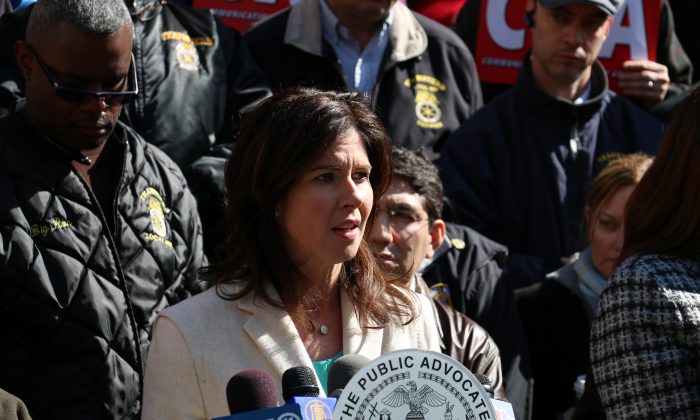 NEW YORK—The employees at a United Parcel Service, Inc. facility in Maspeth, Queens who walked off the job on Feb. 26 are feeling the consequences of their action. This week, the 250 employees involved received termination notices from the company. Twenty were let go on Monday, and the rest will be released upon notice.

The workers, supported by city officials, responded with a rally today in front of city hall to protest the company’s decision.

“The public has stood behind us from day one. More than 100,000 people have signed a petition calling for the reversal of these discharges,” said Tim Sylvester, president of the International Brotherhood of Teamsters Local 804, the union that represents UPS employees.

The demonstrators also raised issues of general mistreatment. UPS employee Domenick DeDomenico was severely injured in a car accident while on the job. He suffered brain injuries and spent a year in recovery. When he returned to the job, management chastised him for not being able to deliver as fast as he did before his accident. A week later, he was informed he would be released when a replacement is found.

“We come from all over the city and the suburbs to come work, and that’s what we do. It takes a toll on us, it takes a toll on our families, on our physical health, but we want to work. We love our jobs, we love dealing with the customers. All we want is the dignity and respect that we deserve,” said Vincent Perrone, a UPS driver and local union representative.

Elected city officials came to support the workers. They warned that the city may reconsider the benefits given to UPS if it refuses to treat its employees with respect. The city currently gives UPS a discount for the millions of dollars in parking fines UPS trucks rack up each year.

“An issue that could have been resolved behind closed doors has now developed to a point where all the benefits that UPS enjoys, all of the tax breaks that UPS enjoys, is now on the table for discussion,” said Public Advocate Letitia James.

“They have a privilege to work in the city, they get government contracts. We expect in return that they’re going to treat their employees [well], and not mistreat them,” said Councilwoman Elizabeth Crowley, who represents Maspeth.

UPS has responded that workers across New York who didn’t participate in the walkout would suffer if the city decided to cut back on its contracts with UPS. UPS employs more than 6,000 union-represented workers in the five boroughs and more than 16,000 across the state.

“UPS appreciates its business with the New York public offices. Ultimately, if that business is reduced or eliminated, the result will be reduced need for UPS employees to serve the pick-up and delivery requirements of city offices, potentially impacting the livelihoods of the many local UPS employees that did not join in the illegal work stoppage,” UPS spokesperson Steve Gaut wrote in an emailed statement.

“Businesses and unions cannot successfully operate in an environment that allows public officials to arbitrarily choose when employees can break collective bargaining agreements or demand when employers must disregard the terms of agreements, irrespective of the officials’ motivation.”

On Feb. 26, long time UPS employee Jairo Reyes was fired over work hour violations. The 250 other workers at Reyes’s facility walked off the job for 90 minutes to protest his firing.

Other than those sent home on Monday the remaining 230 are will be released once replacements are found and trained.

UPS contends that the union contract specifically disallows walkouts. Gaut said that the workers were warned about the consequences of the walkout as they left their jobs. He added that the unionized employees were let go because they violated their contract with the company.

“The agreement between UPS and the International Brotherhood of Teamsters Local 804 has provided for decades that the Company has the right to discharge any employee who participates in unauthorized work stoppage … We simply cannot allow employee misconduct that jeopardizes our ability to reliably serve our customers and maintain order in our delivery operations.”

The workers say they want UPS to give them their jobs back and points of contention can be negotiated. James said that she has sent a letter to UPS asking for the company to set up negotiations with the union.

“I would like to see them at least start talking to our union representatives again,” said Perrone. “Just come to some conclusion, whatever that may be, if it’s a suspension or a slap on the wrist. But they don’t seem to want to do that.”