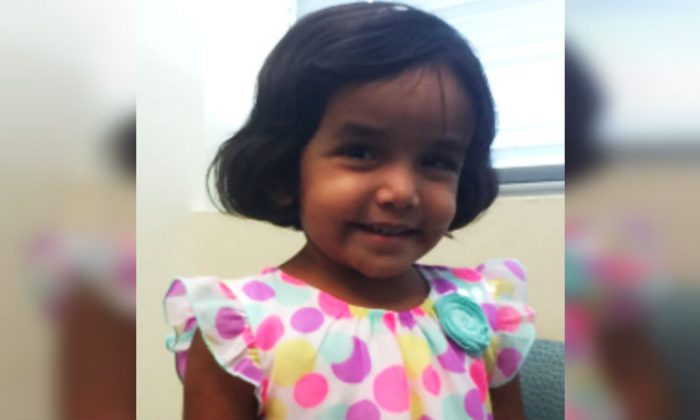 The Dallas parents of adopted toddler Sherin Mathews, who was found dead in October, have been denied the right to see their biological 4-year-old daughter.

A Dallas County court found “aggravated circumstances” surrounding the death of the 3-year-old, and refused the request of Wesley and Sini Mathews to see their biological daughter until a former civil trial has taken place, reported WFAA.

Wesley Mathews is taking the stand now. He wants to assert his fifth amendment and spousal privilege right. He refuses to be a witness against his wife. #SherinMathews pic.twitter.com/kGo6AHqzou

During the hearing last week, the court heard that Sherin had injuries that were inconsistent with the explanations given by Sini Mathews. In Dr. Susan Dakil’s testimony, a pediatrician who had seen Sherin for weight management among other issues, she detailed how Sherin suffered multiple bone fractures and concluded that the toddler was likely to be physically abused.

Dakil returned again on Tuesday to give further evidence. She testified that she referred Sherin to a clinic for children at risk for abuse in February as the girl’s weight was dropping, reported the Dallas Observer.

A second witness, a CPS investigator, Kelly Mitchell, also took the stand at the hearing to describe what happened when she removed the Mathews’s biological daughter from their home. Mitchell said Sini was “eerily calm” and did not mention Sherin’s name during the removal process while her biological daughter did not cry, reported WFAA.

Mitchell also said she noticed many photos of their biological child but didn’t see any of Sherin.

Richardson police Detective Jules Farmer, who lead the investigation in the Mathews’ case, was the third witness to give evidence at the hearing.

Farmer said he felt the couple was not telling the truth as they had inconsistent stories. According to the detective, Sini told police that she woke up at 5 a.m. and saw a “weird look” on her husband’s face. Afterwards, they went to the breakfast table, cried, and prayed for three hours instead of calling police when they discovered Sherin was missing, the WFAA reported.

In Wesley’s initial version of the story, Sherin, who was sleeping in a crib in her parents’ room, woke up in the middle of the night and requested to drink milk which she hadn’t finished earlier. Wesley and Sherin then went out into the kitchen. When the toddler refused to drink her milk, he ordered her to stand next to a tree as punishment.

Wesley later changed his story when he alleged that he’d been trying to get the 3-year-old to drink her milk in the garage at 3 a.m. on Oct. 7, and “physically assisted” her when she wouldn’t listen, according to the arrest warrant.

Sherin started coughing and her breathing slowed. Moments later, he no longer felt a pulse on the child and believed she had died.

Wesley admitted to the police that he removed Sherin’s body from the house and placed her in a nearby culvert after throwing out the trash. The detective indicated that Wesley had intended to return to the culvert and give the little girl a burial.

An autopsy has been done for Sherin but the results have not been released, according to the detective.

The police said the investigations are still ongoing, reported WFAA.

UPDATE: state asks judge to find aggravated circumstances on both Sini and Wesley.

"They have both failed to protect either of their children. Wesley Mathews has told numerous lies" @wfaa pic.twitter.com/GJtpTtJODI